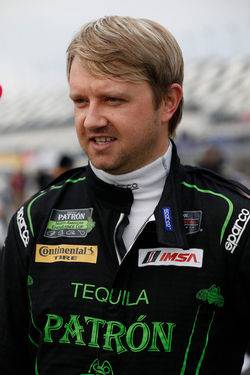 2018 marked Ryan’s fifth season with Tequila Patrón ESM. A season with so much promise ultimately ended with disappointment. Ryan had mechanical failures in 8 of 10 races with his NISSAN DPi, additionally Tequila Patron opted to withdraw their sponsorship from ESM and the program ended after the final race of 2018. However Ryan had a kick ass season in Pirelli World Challenge, teamed with young American Parker Chase where they won the 2018 Pro/Am Sprint X Championship in an Audi Sport R8 GT3.

2016 4th in the World Endurance Championship driving for Tequila Patrón ESM. Ryan finished in the top five for every FIA WEC race of the season with the exception of the 24 Hours of Le Mans.

2012 Speed.com Sports Car Driver of the year, Ryan Dalziel, is one of Scotland’s leading professional racing drivers. With a track record of success forged in the ultra-competitive junior formulas in Britain, and honed further through the highest levels of open-wheel racing, and more recently, Sports Car competition in North America and internationally.

The 30-year-old Scot, living in Florida, proudly sports the St Andrew’s flag on his race suits and racecars throughout his career, not to mention a tartan design-oriented race helmet. Ryan is a firm fan favorite thanks to his outgoing and fun personality.

Ryan has represented Scotland and the United Kingdom at the highest level of competition, earning victories in some of the most prestigious Sports Car races around the globe, including the 24 hours of Le Mans, Rolex 24 at Daytona, 12 hours of Sebring and Petit Le Mans.

2012 was Ryan’s fairy tale season. Driving the #8 Starworks Motorsport Daytona Prototype, he captured the Pole for the 50th running of the Rolex 24 at Daytona. He went on to finish runner up, just five seconds behind the race winners, after leading the most laps with teammates Alex Popow, Enzo Potolicchio, Allan McNish and Lucas Luhr. Ryan also finished runner up in the overall driver standings, with one victory and six podiums throughout the Grand Am Rolex season. Starworks Motorsport expanded into the FIA World Endurance Championship with their HPD LMP2, winning not only the team championship, but the 24 hours of Le Mans and 12 hours of Sebring. Ryan also competed in the American Le Mans Series, winning races at Long Beach, Baltimore and Petit Le Mans. The Scottish Motor Racing Club acknowledged Ryan’s dream season in December 2012 by awarding him the William Lyons trophy.

2011 saw Ryan driving the #8 Starworks Motorsport FORD/Riley Daytona Prototype in the Grand Am Rolex series once again. After a strong assault on the Rolex 24 at Daytona with season teammate Mike Forest, Tomas Enge, Colin Braun and Jim Lowe, Ryan went on to finish the season with a victory at the finale in Mid Ohio. Ryan also competed in the American Le Mans Series for Core Autosport in the LMPC class at the 12 hours of Sebring and Petit Le Mans. He took second place in class at Sebring, but a mechanical failure took him out of contention at Petit Le Mans.

2010 was a monumental year, kicking off with the overall victory at the Rolex 24 at Daytona for Action Express Racing. Ryan then moved to the #8 Starworks Motorsport Daytona Prototype for the remainder of the season. After running in contention for the championship title for the majority of the season, he ended up 5th in the driver standings. 2010 also saw Ryan campaign the Jaguar RSR GT2 in the American Le Mans Series, which included his first trip to the prestigious 24 hours of Le Mans alongside teammates Marc Goossens and Paul Gentilozzi.

2009 was a season of ‘highs and lows’ for Ryan. He began the Grand Am Rolex season with Alegra Motorsports to spearhead their first year in the Daytona Prototype category. The season started well, but a team sponsor failed to materialize and the program was halted for the next four races. Ryan competed once more for Alegra before making the tough decision to move to Orbit Racing to finish out the season. The move was a success, as he scored a podium on his debut race for the team, recording Orbit Racing’s and teammate Bill Lester’s first Grand Am podium.

2008 saw Dalziel grace the top step of the Grand Am podium, claiming his first Daytona Prototype victory at California’s Laguna Seca, in what was a typical charging performance from the Scottish racer. Ryan’s success was short lived as the cars funding fell apart and he found himself out of work. Luckily SuperLeague Formula had contacted Ryan earlier in the year, looking for a Scottish driver to compete in the inaugural season. Ryan’s Grand Am commitments meant he initially declined but went on to race the remaining races for Rangers FC.

2007 saw Ryan compete in the Champ Car World Series, in doing so becoming only the second Scottish driver to compete in the series following in the footsteps of Dario Franchitti. As a Champ Car rookie, and competing for a team new to the series as well, Ryan showcased his talents behind the wheel steering his way to a total of six top-ten finishes from eleven starts made – including leading laps at the Toronto Grand Prix, a significant achievement for a young driver in a new race team. The 2007 season started with Ryan finishing runner-up in the Rolex 24 at Daytona driving for SAMAX Motorsport in their Pontic/Riley Daytona Prototype.

Ryan’s first career start in the Champ Car World Series, a one-off entry at the 2005 Toronto Grand Prix, proved his ability to master top-flight open-wheel racing equipment as he scored a top-ten points paying finish on his debut, ninth overall, despite just one day of testing prior to the race.

Twice a finalist in the prestigious McLaren Autosport BRDC Young Driver of the Year Award, Ryan was awarded the ‘Ecurie Ecosse Trophy’ in 1999, presented to the most impressive Scottish racer of the season, and in 2004 he won the ‘Gilles Villeneuve Trophy’, traditionally given to the driver in the Toyota Atlantic series possessing the most star quality and ability.