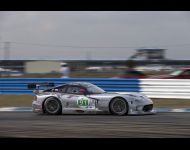 2012 Speed.com Sports Car driver of the year Ryan Dalziel battled the bumps of the iconic Sebring International Raceway to give SRT Motorsports a fighting fifth place finish in the Twelve Hours of Sebring.

Ryan – originally from Airdrie in Lanarkshire – showed he has maintained the form that took him the FIA World Endurance Championship LMP2 team title and second place in the GRAND-AM Rolex Sports Cars Series with two flawless stints in Florida.

He handed over to Dominik Farnbacher in second place, but an electrical glitch in the Viper GTS-R meant they lost three laps and dropped to fifth before the German star could get back out on track.

They still fought hard to bring the car home in one piece, but it was scant reward after Ryan – who lives in Windermere, Florida – Marc Goossens and Farnbacher produced some stunning laps to take the car from its tenth-place start on the grid into the lead. 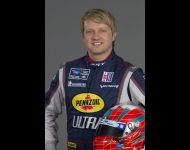 RYAN SAYS: "I think we were pretty confident in our package. The car has been pretty well balanced all weekend. As much as we're disappointed, we've got to be proud of the job we did. It's really great for SRT starting their full season campaign.

"We passed the lead cars a number of times and we deserved to be up there. We have speed in the car and now we just need to work on all the little things. It's the little things that come together and win championships.

"When I signed up for this deal, I knew the people at Riley and the people at SRT wanted to win. I came here after winning this race last year and I expected nothing less than victory. I'm really proud to be part of this program. It's really an amazing deal for me.

"I'm a little sad that I don't get to go to the rest of the races but I'm looking forward to seeing the progress of the team. We're going to take a lot of positives away from today because the whole team did an incredible job. The crew did an amazing job. We had great pit stops and a really good car so we move on to the next one."

GARY JOHNSON - SRT MOTORSPORTS RACING MANAGER – SAYS: "The speed was fantastic. Of course we're not going to be happy until we win one of these races but the speed was there. The drivers did a great job and the team was flawless on all our pit stops.

"Just a few items to go back on to the drawing board with and we'll get those corrected. The next race ought to be that much better. I think it proved that the cars have potential and the drivers are key to that. They brought it home without any contact with any other cars. That's a good thing to have."

NOTES: Ryan will next be in Grand-Am Rolex action for Starworks Motorsport at Barber Motorsports Park, Birmingham, Alabama, April 3-6, 2013.