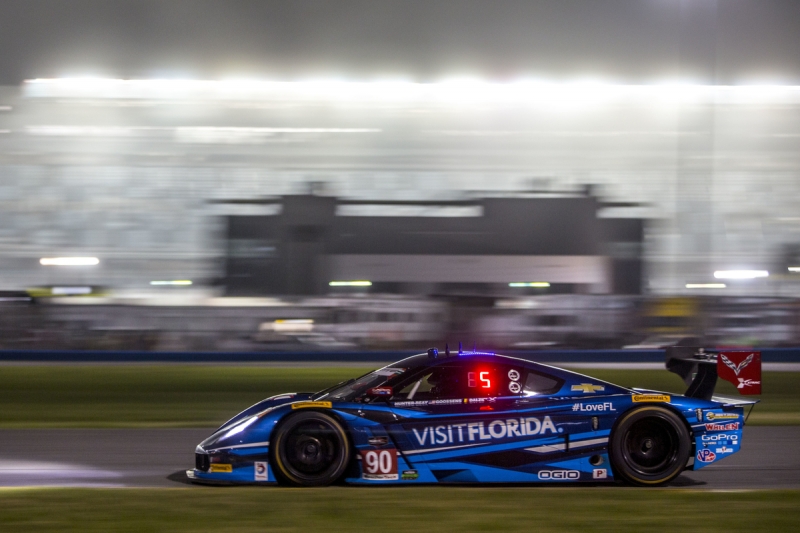 Despite the on-track sessions cut a bit short due to a fog delay on Saturday, the Visit Florida Racing squad was able to take away a lot of information and data through seven on-track sessions during the weekend. The team continued to develop the balance of the car in preparation for the 54th running of the Daytona event at the end of the month.

“This test was about learning the drivers and building some of our stuff up,” said Team Owner Troy Flis. “All in all it was a good test for us close to home at the Roar. We’re still working on our car. We’re not completely happy with where we’re at so we’ll just keep working on tuning and developing the car. Other than that, we’re pretty happy with the way everything is going.”

The Visit Florida Racing trio of drivers have all driven together previously and were thrilled to be back in action together. Each driver likes the car with a similar set up and enjoyed getting to know the intricacies of the team.

Visit Florida Racing will return to its Daytona Beach race shop in preparation for the Rolex 24 At Daytona. The season-opening event kicks off on January 30, 2016.

DRIVER QUOTEBOARD:
Marc Goossens: “We (all three drivers) all know that we’re all at the same level of competitiveness so there’s no challenge or anything between us. We also know that all three of us like a similar car. That’s what we’re working toward now and learning to understand how the engineering side of the team works. What they want to know from us, how we communicate best. In that aspect, we’ve had a pretty good test to learn from each other. For us it was mainly getting used to the team and the car and the best way of communicating with everybody and that’s working out well. I think we’re still learning what the car likes which has been tough because we had a little bit of track time that we didn’t get to use, as we were working to sort out a pair of small technical problems. We had to put a new gearbox in yesterday so we lost some track time. I’d rather have that happening now than in a couple of weeks. So far we’re very happy with how everything is working and it’s just a matter of fine tuning the car now.”

Ryan Dalziel: “When you start fresh with three new drivers, there is a little bit of a learning curve in taking a car that was pretty sorted last year and throwing three new drivers in there who like something a little different. We’ve been going through the motions of fine-tuning it between myself, Ryan (Hunter-Reay) and Marc (Goossens). I’m super happy to be back at Daytona and with Visit Florida Racing. We’re going through our book of changes to see where we want to come back for the race. We’re all confident we’ll have a pretty good package.”

Ryan Hunter-Reay: “It’s great to be with the team and part of a team that knows how to win races. It’s a great atmosphere and these are teammates that I have a great relationship with. We’re working on it. We’ve had some bumps on the road here with some gearbox issues and lost a lot of track time to that. We’re working on some mechanical setups that hopefully will let us find some more grip. Hopefully when we come back we’ll be at the sharp end of things.”