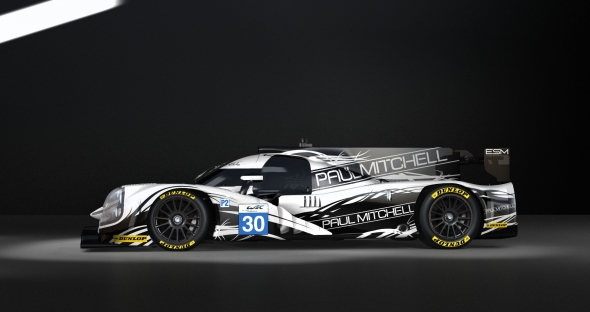 “We are so excited that Paul Mitchell has finally arrived to Le Mans racing,” said Paul Mitchell CEO John Paul DeJoria. “Our world distributors are looking forward to the race, and all of us thank our family, Patrón Spirits, for making this possible. This Tequila Patrón ESM team won both Sebring and Daytona. Look out France, here we come!”

“We’re so excited to return to Le Mans,” said Brown. “The only downside is French law prohibits us from running the black and green livery with our Tequila Patrón branding, but we are so fortunate to have Paul Mitchell as our primary sponsor for this race! It’s nice to be able to keep it in the family, and join forces to try and win the biggest endurance race in the world.”

“Everyone at Tequila Patrón ESM welcomes Paul Mitchell to our team and the largest Motorsports event in the world, the 24 Hours of Le Mans,” said Team Owner Scott Sharp. “We are excited to showcase this incredible brand to the millions of fans that will be watching us go for the top step of the podium!”

Tequila Patrón ESM has proven to be a force to be reckoned with in 2016, starting with sensational back to back performances in the IMSA WeatherTech Sports Car Championship. The team’s success started with a win at the Rolex 24 Hours of Daytona, becoming the first team to win the endurance race in a P2, also earning Honda its first overall win at the event. Two months later, the Florida based team won round two the championship in their home state at the Mobil 1 Twelve Hours of Sebring. From there the team, equipped with two Nissan Ligier JS P2 cars, returned for a full season in the WEC, starting the championship off with a second place finish at the 6 Hours of Silverstone. In Round 2 of the championship, the team again showed a strong podium effort, finishing second at the 6 Hours of Spa.

The team currently sits third in the LMP2 class championship, just four points away from the top position. The drivers of the No. 31 Tequila Patrón Ligier sit third in the LMP2 driver championship, one point shy of the class leaders. As the longest race on the FIA WEC calendar, the 24 Hours of Le Mans offers double points, with first place being awarded 50 points, second place will receive 36 points, and third place will take 30 points. The remaining six races on the 2016 schedule will return to the normal point system.

The first official test day of the 84th 24 Hours of Le Mans will take place Sunday, June 5, allowing all 60 competitors to properly prepare for the main event two weeks later. The race will begin Saturday, June 19, with coverage starting at 8:30AM on FOX Sports 1. For more information, visit www.fiawec.com.