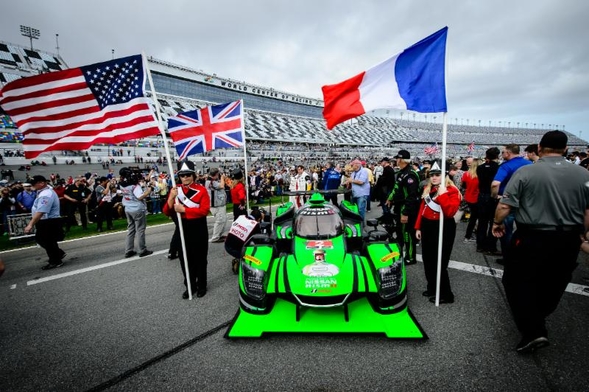 DAYTONA BEACH, Fla. - In the early hours of Sunday morning, after over twelve hours of racing, Tequila Patrón ESM officially retired both Nissan Onroak DPi cars from the Rolex 24 at Daytona. Both cars showed impressive speeds and proved to be competitive in the tight prototype class in the WeatherTech SportsCar Championship. In the end, the cars were unable to make it through the full 24 hours of racing.

Both Nissan Onroak DPi cars started the Rolex 24 at Daytona towards the rear of the prototype field when the No. 2 car team opted to do a preemptive engine change, forcing the car to miss the qualifying session. The No. 22 Nissan Onroak took the green flag for qualifying, but went off course, ending their session without getting a fast lap in. With 24 hours of racing to make it to the front, the team was not discouraged, and put all focus in the final race preparations.

Both Nicolas Lapierre and Ryan Dalziel took full advantage of the Nissan power in their opening stints. Lapierre started in 18th and quickly found his way to 11th in the opening laps, while Dalziel catapulted his way from 20th to 14th. Before the end of his first stint, Lapierre cracked into the top ten, and finished his second stint in fourth position. Dalziel stayed close behind, continuing his own climb from 14th to seventh. Speed, consistency, and clean racing were the vital components to the next stints, as Pipo Derani and Olivier Pla took command of the Nissans. Derani brought the No. 22 Nissan Onroak DPi back up into the top five, hitting the team's target fuel numbers and preserving tires while still gaining vital ground. As the duo ran fifth and sixth overall, the first of several right rear tire problems arose.

Pla reported a tire going down, and immediately pitted the No. 2 from sixth for a replacement set, rejoining in 11th position. As the race stayed green, he picked off his competitors one by one to advance up to seventh before Scott Sharp took over to turn his first laps of the race. Meanwhile, Derani pressed on, charging his way up to the front of the field. He made a pass on Ryan Hunter-Reay in the No. 10 Cadillac to break his way into the top three.

The first full course caution took place just over two hours into the 24 hour event, setting Derani and the No. 22 and Scott Sharp in the No. 2 to restart second and sixth, respectively. The field took the green flag, and Derani charged after the race leader, but a sudden right rear tire failure forced the Brazilian to slow down, move off the racing line and limp the No. 22 Nissan Onroak DPi back to pit lane. Johannes took over during the pit stop, rejoining in 16th position. Just 30 minutes later, he pitted with a strong right rear tire vibration, and the team made a precautionary tire change. Dusk set upon the track, and Scott Sharp put in an impressive stint, climbing from sixth to second. Dalziel took over the No. 2 from Sharp, and Nico Lapierre climbed in the No. 22, and both drivers produced impressive lap times, with Lapierre setting the fastest lap of the race.

At the five hour mark, light rain turned to downpour over the speedway, resulting in the majority of the field pitting for rain tires. Both cars survived the weather to again return to slick tires, with Olivier racing in fifth, and Lapierre in 14th. In the early hours of Sunday, the team pressed on into the darkness, consistently holding position and taking advantage of the attrition of others. In the final hours of Saturday, trouble appeared for the No. 10 and No. 90 Cadillacs, and by midnight, Ryan Dalziel raced in fourth, and Nico Lapierre and the No. 22 were back into the top ten. Back at the wheel of the No. 22, Johannes van Overbeek engaged in a heated battle with Formula 1 champion Fernando Alonso, trading back and forth ninth position.

As the second full course caution produced itself just after midnight, trouble struck again for the No. 2 Nissan DPi. The car took a brief trip back to the garage for a possible gearbox issue, putting him three laps down. Less than 20 minutes later, it became apparent that the issue needed more attention, forcing Dalziel to return to the garage. At 3:00AM, with 12 hours and 40 minutes of racing complete, the No. 2 Nissan Onroak DPi retired with a gearbox issue.

Meanwhile, Nico Lapierre and Pipo Derani were the next two drivers to pilot the No. 22 car up to the top five. As Johannes van Overbeek waited in the wings to take his next stint, the car began to show signs of engine troubles, and Derani brought the Nissan into pit lane surrounded by smoke. In the end, the engine gave out, ending the race for Tequila Patrón ESM with two early retirements.

While the race did not present the results the NISMO development team was hoping for, there will be a chance of redemption March 14-17 at the Mobil 1 Twelve Hours of Sebring in Sebring, Florida. The Florida-based team won the endurance race in 2016, and will return with its Rolex 24 at Daytona lineup to seek a repeat win.

Scott Sharp
Wow. I feel horrible for the entire Tequila Patrón ESM team - for Patron, Onroak, Nissan and of course all of the guys. Both cars really came alive during the race and we all felt if we could just stay out of trouble we could be contenders at the end. It's such a shame.

Ryan Dalziel
It was a disappointing day. We struggled for pace here last year, but we definitely had the speed here today. Both cars had failures at the halfway mark, and that's just racing, especially at Daytona. It' sa bummer for the whole team. After our car retired, I came over to cheer on the other car to get their laps back, but that all went up in a big puff of smoke. I hope the guys can get some rest and then back to work in a couple weeks for testing.

Olivier Pla
Gearbox failure was not what we expected as we were running a strong race with a strong pace until that point. My teammates and the whole Tequila Patrón ESM team did an amazing job! Our focus is already turned on to Sebring!

Johannes van Overbeek
It's unfortunate. We had a good run going, the car was good. We had a couple of little problems that we came back from. Pipo and Nico were doing a great job staying clean and staying out of trouble, but that's the way it goes.

Pipo Derani
I'm disappointed and sad for the team. We lost both cars in this race, but we will fight back soon.

Nicolas Lapierre
It was really hard to retire after such a team effort. We fought to come back after a few punctures, and we had the pace to fight for the win. From today, we will focus on the Twelve Hours of Sebring.