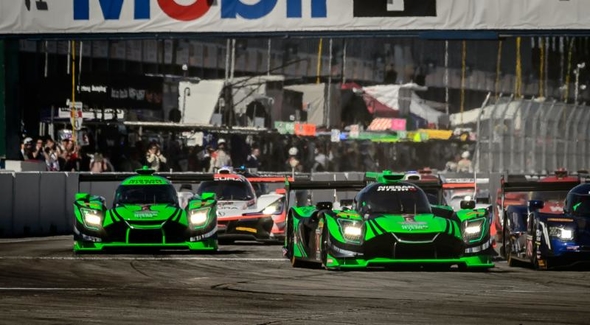 "What a great day," said Team Owner Scott Sharp. "We needed this so badly. We were really heartbroken after Daytona. We needed this as a team, and we needed this for Tequila Patrón. These guys just did a great job and with flawless moves. The pit stops were great, the car performed, and Nissan did a fabulous job. I'm so proud of the entire team."

While Pipo Derani and the No. 22 avoided any contact, the car fell back in the turn one shuffle to run the opening laps in seventh. He methodically worked his way in in his opening stint, following the engineering and strategic guidance of the team in pit lane. Derani caught the third place car, the No. 90 Cadillac, and effortlessly made the pass. Johannes van Overbeek took over one hour and 14 minutes into the race, holding off Jordan Taylor in the No. 10 to keep third place. He closely aimed for the team's fuel conservation numbers, maintaining second place position behind the No. 31 Cadillac of Eric Curran, and took the lead as pit stops began to cycle through. Roughly two hours and 30 minutes running, Nico Lapierre took over to turn his first laps of the race, starting his stint in fifth position. Shortly after the three hour mark, Lapierre had climbed to third position, and then the lead. With 112 laps complete, he had extended his lead to 7.225 seconds.

Lapierre pitted under caution, and Pipo Derani returned behind the wheel in second place to resume his driving duties. A series of cautions and green flags followed, during which Derani took the lead from No. 7 Acura driver Helio Castroneves with four and half hours complete. Derani performed with his usual finesse, extending his lead lap after lap. Just before the halfway mark, Derani held an impressive 17 second lead over Castroneves before yet another caution graced the Twelve Hours of Sebring.

The No. 2 Nissan and the No. 55 Mazda of Spencer Pigot battled in the final hours of the afternoon, but the Nissan kept the position, and Derani set his personal fastest laps of the race thus far. At the conclusion of the young Brazilian's stint, van Overbeek took over, 72 seconds behind the leading Mazda. The Mazda pitted, expecting to use the lengthy lead to their advantage upon pit lane exit, but trouble in their scheduled stop allowed van Overbeek to speed past on the straight and take the lead while the Mazda was still exiting pit lane. He momentarily lost the lead, but another series of yellows and smart strategy allowed for van Overbeek to take back the top position in the No. 2 Nissan Onroak DPi after 218 laps of racing. At the eight hour mark, van Overbeek sat in first, earning the team valuable points for the Tequila Patrón North American Endurance Cup Championship points.

He extended his lead to over nine seconds with less than four hours remaining, and Nico Lapierre returned to race in the golden hour. As dusk slowly descended on track, all eyes were on the battle for first position between the No. 31 Cadillac of Mike Conway and the No. 22 of Lapierre. The two prototype drivers weaved their way through GT traffic. Lapierre tried to slip on the inside of turn one to make the pass, but slipped back. He continued to push, fighting off pressure from the No. 90 in third position. As Lapierre worked his way around the final turns of the course in the heat of the battle, the telemetry from pit lane alerted the team that the No. 22 had a right rear puncture, and that Lapierre had to leave the fight and pit immediately.

He pitted for a new tire and conserved fuel for the first few laps, but then new orders from the pit box told the Frenchmen to push for the position. Lapierre had rejoined in third position, and just laps later, he found himself back in the fight with the No. 31 for the lead. He pulled up alongside the No. 31 on the back straight, and upon exiting turn 17, snuck on the inside to take the lead position on quickly create a four second gap.

Two hours remained on the clock when Pipo Derani took over the No. 22. After a flawless stop by the Tequila Patrón ESM crew, he joined the field in second, 29 seconds behind the No. 55 Mazda. The No. 90 Cadillac had a hard incident in turn 17, bringing out another full course caution, leading everyone to pit for tires and fuel and landing on the same strategy. Derani restarted in second, and snatched back first position before another caution came out moments later, closing the gap the leader had over the Nissan.

Derani took the lead on the restart and never looked back. In the final 30 minutes, he brought the Nissan Onroak DPi in for its final pit stop, and raced ahead to the finish line. Together, Derani, Johannes van Overbeek, and Nico Lapierre finished in first overall, claiming the second Twelve Hours of Sebring victory for Tequila Patrón ESM. The No. 22 car also won round two of the Tequila Patrón North American Endurance Cup, the endurance championship within the full season competition.

Driver Quotes
Pipo Derani
Just Unbelievable. It's the second victory in three attempts. It's amazing. From 2016, to having a problem last year, and coming back to win is just amazing. This victory goes to my dad who is watching us back in Brazil and is fighting for his health. I'm just so happy to be able to win and know that he's watching my race. I just have to thank the entire team for giving me this opportunity to win again and win in front of him.

Johannes van Overbeek
This win couldn't have been possible without the support of Tequila Patrón. I think ESM proved its mettle today. A lot of teams and manufacturers had trouble. The Nissan power worked great all day, and the tires were great. My co-drivers did an amazing job. It was one of those races were everything fell into place when it needed to. We didn't have any issues whatsoever, and I don't even think there's a scratch on the car. That's the way it should be.

Nico Lapierre
What an amazing day at one of the toughest races in the world. It was a really special day. It was a really great job from everyone on the team: the strategy, the setup of the car, the team in the pit stops, and my teammates on the track. Everything was perfect today, and we made no mistakes. I'm really proud of everyone. We weren't lucky in Daytona, but we fought back hard to be here. I'm really proud of everyone.