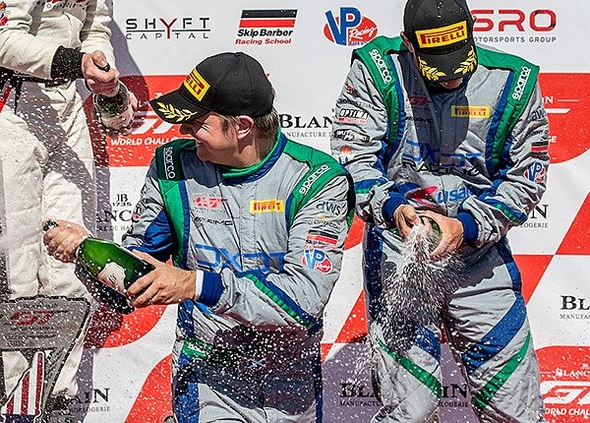 DXDT Racing earned a pair of podium finishes with its Blancpain GT World Challenge America Mercedes-AMG GT3 entries this past Saturday and Sunday at VIRginia International Raceway (VIR) in what was just the second weekend of competition for the expanded two-car GT3 team.

In Sunday’s second and final race, George Kurtz and Colin Braun represented DXDT on the podium with a second-place Pro-Am finish in the No. 04 CrowdStrike/AWS/DXDT Mercedes-AMG GT3.

The third-place showing for Askew and Dalziel was a rebound and redeeming performance one race after an accident early in March’s Blancpain GT World Challenge America season-opening event weekend at Circuit of The Americas (COTA).

“We put the incident at COTA behind us and moved forward,” Askew said. “We got back on the track, the car was just like new and the test at VIR the week before the race helped a lot. Both DXDT cars unloaded well, had pace and were competitive, and the drivers were competitive.”

Kurtz and Braun earned Sunday’s runner-up showing in just their second race with both DXDT and as co-drivers in the top-tier GT3 category.

“We had a great weekend at VIR,” Kurtz said. “Colin and I had a good first race and were in a position for a podium finish, but we got shuffled back a little bit in the restart. We bounced back Sunday with a strong second-place finish! Colin did a fantastic job bringing it home. Big thanks to the DXDT team and crew, and the CrowdStrike team for putting it all together. We had a great car and a great result for the weekend!”

In true team fashion, both DXDT teams stepped up to reach the podium when their teammates encountered issues.

Braun was looking good for the podium in the No. 04 Saturday before the late bump-and-run by a lapped car, but Dalziel was right there to put DXDT in the top three in the No. 63.

“The DXDT Racing guys have pretty much been working flat out, built a new car, and it was great to have a reliable weekend with no issues,” Dalziel said. “We definitely felt like we had a good long-distance car and we proved that in Saturday’s race. “Despite some setbacks in David’s stint, we had the pace to come back through and score a Pro-Am podium and sixth place overall.”

The No. 63 encountered problems both early and late in Sunday’s race, but Kurtz and Braun had a trouble-free run for the weekend-best second-place finish.

“Saturday didn’t quite go how we wanted,” Braun said. “George and I had a podium run going then on the last restart I got moved out of the way by a lapped car. Sunday was a much better day. I was able to bring the car to George in second and he finished a great drive to bring home a second-place finish in class. I’m really proud of George and everyone at CrowdStrike and DXDT Racing for executing a solid race. I hope this starts a streak!”

If not for the issues, DXDT could have very likely scored dual podiums in both races.

“If we had a clean, flawless race, we could have been on the podium right there with the No. 04 car on Sunday,” Dalziel said. “We started strong, were battling in the top-three overall only to have a wheel nut go bad. We had to make an unscheduled pit stop, which put us behind, and then we had an electrical glitch right there at the end. It’s too bad because David was having the stint of the year for himself. He really had good race pace.”

Next up for DXDT Racing and the Blancpain GT World Challenge America is Rounds 5 and 6 of the championship at Canadian Tire Motorsport Park, May 17 – 19.

“Ultimately, a good result for the team at VIR,” Dalziel said. “We had a podium both days and we will just keep putting it together and head to Canadian Tire Motorsport Park looking for a double podium.”