RIGHT TIME FOR RYAN DALZIEL TO GRAB ANOTHER ROLEX 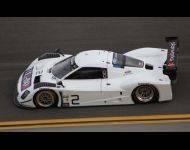 SPEED.COM 2012 Sports Car Driver of the Year Ryan Dalziel launches his new website and his 2013 season at Daytona International Speedway this weekend with a determined bid to banish the one blackspot on his 2012 campaign.

Proud Scot Ryan — who now lives in Windermere, Florida — enjoyed a dream season with Fort Lauderdale-based Starworks Motorsport as they won the World Endurance Championship LMP2 title and came second in the Grand-Am Rolex Sports Car Series as he enjoyed a staggering 21 podiums in 27 races.

But there was one podium that HURT — when Ryan, 30, came second in the Rolex 24, just five seconds behind the winner after 24 hours of hard racing in Florida.

Now Ryan is back and he wants another Rolex watch to add to the one he won in 2010. The star, originally from Airdrie in Lanarkshire Scotland, will team up with fellow Scot Allan McNish, French ace Sebastien Bourdais and Venezuelan star Alex Popow in the Starworks Ford Riley.

They enjoyed a good Roar Before The Rolex 24 test and they they are ready to put the pedal to the metal when the action starts...

RYAN SAYS: “We were happy with the way the championship went for us in Grand-Am, but we definitely regretted not winning Daytona.

“That hurt from the day after the race and we felt it for the rest of the year. We would almost take the reverse this year – we wouldn’t mind winning Daytona then the championship not going as well because it is the one race that me and the team want. We let it slip away last year. You can’t do that at Daytona when you have such a fast, reliable car. We feel we are a stronger team this year.

“It was a race in itself to get the car ready for last year. We feel we are better prepared and we have a stronger line-up.

“There will be 17 Daytona Prototypes out there, but they all have strong line-ups. I think there are at least 10 cars who could win this race. That is very exciting.

“It is my home track and, now that we don’t have Miami Homestead Speedway, it is also the home race for the team. We don’t need extra motivation, but it is always nice for me to go to my own bed. I love Daytona and I want to win it again probably more than any other race.”

How have you prepared for the new season?

RYAN SAYS: “It really hasn’t stopped — Alex and I had races in Colombia and Abu Dhabi at the end of the year then we had the pre-season Roar before the 24 test in January.

“It has been business as usual, but there has been much more work for the team than me. That said, it does feel like an eternity since that last Grand-Am race. I am looking forward to getting back into it and, hopefully, it will be another busy year.

“It was a tough off-season for me. At the end of the year, I was diagnosed with a herniated disc.

“I needed a period of rehabilitation which is still on-going. By the time Colombia and Abu Dhabi came around, I felt like I was in good shape with my back. I worked hard to get back into shape after New Year, but then got the flu. I have worked incredibly hard over the past few weeks and I feel pretty good now.

“It is tough because the off-season is when a driver gets the chance to take those two steps forwards mentally and physically — I feel like I took two steps back. It has been hard to try to make up that ground but I am in good shape. Mentally, I feel very strong which is important because Daytona is mentally very tough.

How did the Roar Before The Rolex 24 go?

RYAN SAYS: “We had a plan for me give up a lot of seat time on the first two days, then go hard on the third day. But, because I had the flu, I had to rely on my team-mates picking up the slack. The good thing is that we all like the same thing in the car.

“We made some good gains on the car. We spent most of the test in race trim — a lot of cars were running in qualifying simulation but we know what we have as a race package.

“There were still a couple of sessions where we were in the top three so we have to be happy with that.

“We think the car will be very good and the new Continental Tire that we started running on midway through last year certainly seems to suit us pretty well. We still have a lot of work to do so we will do that in the first practice sessions, but it is looking good.”

You created an award — to bring a star from the West of Scotland Kart Club, where you started your career — over to the race. The first lucky recipient is Ciaran Haggerty, from Johnstone, Renfrewshire, and his dad Joe.

RYAN SAYS: “It is great. Ciaran is an outstanding talent. It is a pleasure and an honor to bring him across to see another side of racing — away from Formula One.

“He will get the chance to see that motor racing has a lot to offer and he can go in so many different directions. It is an opportunity for Ciaran and his dad to look at another avenue. I know that he wants to be in Formula One — we all did at that age — but this will hopefully show him there is a big wide world out there.

“I want them to relax and enjoy it. They will be part of the team. We will include them as much as we can and maybe get some gloves on Ciaran and give him the chance to get his hands dirty. At that age for me that was important. He wants to work so it will be good. It will be fun. Hopefully, it will be 90 per cent holiday and 10 per cent work.”

World Endurance LMP2 Championship, thanks to class wins at Sebring in Florida, the Le Mans 24 Hours and Brazil.
They were also on the podium at Silverstone in the UK, Japan, China and Bahrain.

He also grabbed LMPC class wins at Petit Le Mans, Baltimore and Long Beach in California as well as a third place in class at Mosport in Canada.