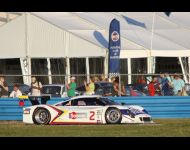 SPEED.COM Driver of the Year Ryan Dalziel’s bid to start the year with a Rolex watch ended in frustration at Daytona International Speedway.

The proud Scot - one of the pre-race favorites – had to settle for sixth place after a string of mishaps hit the Fort Lauderdale-based Starworks Motorsport Ford/Riley.

But Ryan - who lives in Windermere, Florida, but is originally from Airdrie in Lanarkshire, Scotland – has promised to use the pain of the performance to boost his Grand-Am Rolex Sports Car Series title bid with Venezuelan ace Alex Popow.

The Starworks team had defied sleep to get the car ready for the race, and Ryan was in the seat for qualifying. He had the Ford/Riley on the limit, but could only manage seventh place.

But Ryan proved he had taken the form from last year’s FIA WEC LMP2 world title-winning campaign into 2013 with a string of hot laps. Alongside fellow Scot Allan McNish, Popow and French star Sebastien Bourdais, they proved they could take the battle to the faster Team Ganassi BMWs.

But their bid for glory was ended by throttle and brakeline problems. The Starworks team did an amazing job to get the car back on track but they had lost 11 laps and Ryan was left to bring the car home in sixth place.

It was a tough battle right from the start – a real hard day at the office.

RYAN SAYS: “It was definitely a tough weekend for us. Right from the start we were a little slower than we hoped but I’ve never seen the Starworks team work harder. People won’t know how much work went on during the race behind the scenes but I think, in the end, we have to be proud of getting a sixth place.

“The reliability was there but we lacked in speed compared to the BMWs, so we were making some drastic set-up changes during cautions to improve our car. To be honest, OUR chassis wasn’t the biggest problem. We knew on a one-on-one situation with Ganassi we didn’t have the pace to beat them, but we felt we had the best of the rest when we were out in front.

“I think us and the #10 car were the only real contenders but we were pushing so hard that we really started to beat the car up. The stuck throttle during Allan’s last stint was the start of the downfall. He tried to live with it but ended up killing the brakes so we had to go behind the wall to fix both issues.”

Does this hurt more than last year’s second place?

RYANS SAYS: “In a crazy way this year was much harder for us, even before the late issues. Last year we could run at 95% and control the race. This year we were running at 110% just to keep up. The BMWs were in another class and, in my opinion, it ruined the race for the Rolex24 fans because no Ford or Chevrolet would ever have beaten them in a straight-up fight.

That said, it was still solid points for the championship...have you and Alex Popow started to think about that?

RYAN SAYS: “We went into the race thinking about the championship. From the first hour we knew winning was going to be tough so we focused on being smart and being there at the end no matter what the result. We wanted to be on the lead lap - and I still think that if it had not been for the motor issues we would have been on the podium. But sixth is better than seventh, so we will push to win from here.

“Alex was phenomenal in the race and was running the same lap times as the rest of us. For me, that was the best I have ever seen him drive so that gives me massive confidence for the season. I think he’s going to cause a lot of people problems.”

Do you think Grand-Am will curb the BMWs and give you guys more power?

RYAN SAYS: “They have to do something. Austin is clearly an HP track and I wouldn’t like to be going there if things stay as they are. It was the BMW show when it should have been the Grand-Am show.

NOTES: Ryan will next be in Grand-Am action at the Grand-Am of the Americas presented by Gainsco and Total at Austin n Texas on March 1-2.

Ryan and Starworks Motorsport won the FIA World Endurance LMP2 Championship, thanks to class wins at Sebring in Florida, the Le Mans 24 Hours and Brazil.

They were also on the podium at Silverstone in the UK, Japan, China and Bahrain.