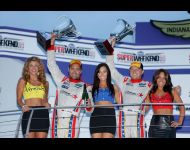 2012 Speed.com Sports Car Driver of the Year Ryan, who originally comes from Airdrie in Lanarkshire, Scotland, and Venezuelan team-mate Alex Popow took the lead in the series with the victory – sitting 10 points clear of Alex Gurney and Jon Fogarty with four races left.

The victory was all the sweeter for Ryan and the team as it was their debut with the DINAN BMW engine – but they had to do it the hard way.

First, they had to start from 12th place and, after an alleged jump-start, Alex was given an early drive-through penalty, which cancelled out all his good early work. He dropped from seventh to 13th, but fought back to be seventh as he handed over to Ryan with just under two hours to go.

Ryan went on a charge and was fifth when a third yellow-flag caution closed up the field once again but pitstops meant he was fourth when the race restarted with an hour and 32 minutes to go.

After passing the #01 of Scott Pruett for third shortly after the restart, Ryan quickly chased down the leaders.

Ryan passed both the pole-sitting No. 10 Wayne Taylor Racing Corvette DP of Max Angelelli and AJ Allmendinger's No. 6 Michael Shank Racing Riley-Ford for the lead with under one hour to go.

The Starworks team opted to bring him in for fuel only on the final pitstop and Ryan was soon sat in second behind leader Rubens Barrichello, who was on an alternate strategy, which Starworks knew he would have to make a stop for fuel before the end.

Everyone was trying to conserve their fuel , but Barrichello was finally forced to pit, leaving Ryan in front. He kept his foot flat to keep ahead of the pack and take a stunning victory.

RYAN SAYS: “I wasn’t sure if I should have kissed the bricks or kissed the guys on the crew first. We got our new DINAN BMW engine only a week ago. We felt we had a pretty special car this year.

“We were missing just that little bit, and now we have it with this engine.

“The race went perfectly. We made some great gains during practice and, clearly, we went the right way. We came here tied with the points lead and we are leaving 10 points in the lead. I couldn’t be happier.

“To win at Indianapolis has always been on my wish list, and those bricks taste really sweet. The timing for this win is perfect and we cannot wait to get this championship to Starworks in four races’ time.”