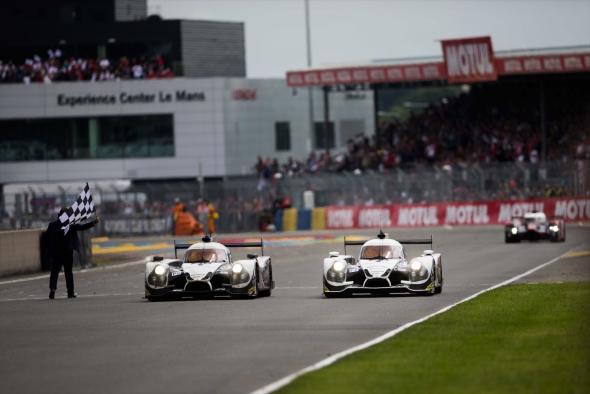 LE MANS, Fra., — This week, in Le Mans France, Tequila Patrón ESM showed a monumental effort at the 84th annual 24 Hours of Le Mans. The two-car LMP2 team performed well all week long in every session, promising to again be a podium contender in the third FIA World Endurance Championship race of the season, also the longest on the 2016 calendar. As the world’s oldest active sports car endurance race, the 24 Hours of Le Mans has always been a force to be reckoned with, unpredictable in who survives the adversity to come out on top. For Tequila Patrón ESM, the team endured hardship not to finish on the podium but to still complete the grueling 24 hours in 11th and 16th positions.

The opening practice as well as the first qualifying session were only under dry conditions, allowing the six drivers the opportunity to become more confident on track. Torrential downpour hampered the last two remaining qualifying sessions, restricting the chances of the Tequila Patrón cars to better their starting positions. The No. 31 of Ryan Dalziel, Pipo Derani and Chris Cumming qualified in sixth position, and the sister No. 30 car of Scott Sharp, Ed Brown and Johannes van Overbeek 16th. Unfortunately, Ed Brown’s qualifying stint was during one of the monsoons, not allowing him to get close enough to the required 110% within the pole position. Per FIA WEC rules, the No. 30 car was sent to the back of the field to start in 21st position.

Trouble came for Sharp in the beginning of hour three, when he reported to the team he had been hit. The No. 30 came in with nose damage, and the team quickly brought him in and replaced the necessary bodywork. As Scott rejoined the field in 19th, his pace improved, gaining back the lost time in the pits, climbing up to 15th. Meanwhile, Dalziel and the No. 31 advanced up to fifth, keeping the car in the top five for the rest of his run until he passed the car to Chris Cumming. Ed Brown took over from Sharp just past the four hour mark, and worked his way up to 14th as dusk descended upon the track.

Derani and Brown look over in the early dawn hours, with the No. 31 making it back into the top ten and the No. 30 close by in 12th position. Contact from another car sent Brown off track, but he was able to get the car restarted and back to pit lane. The team made quick repairs and got Brown back on track in 12th with seven hours to go. He maintained position for three stints before giving the wheel back to Sharp. Cumming ran strong in eighth, staying on the same lap as the two LMP2 cars ahead of him. With less than six hours to go, he had advanced to seventh, giving the car back to Ryan Dalziel.

With four hours remaining, as Sharp passed the No. 30 back to van Overbeek, Dalziel reported a vibration on the No. 31. The right rear rocker broke, requiring Dalziel to pit for repairs. The team quickly got to work, and sent Derani back out in the No. 31, only to call him back in shortly after. Roughly two hours later, the repairs were complete and Derani rejoined the field in an effort to finish with championship points. For the rest of his run, Derani and the team continued to feel a vibration, calling the car back to the garage for lengthy inspections and repairs.

With just two hours left on the clock, Ed Brown returned to the driver seat for the No. 30 Tequila Patrón ESM car to finish out the legendary event. Brown and Derani crossed the checker flag after 24 long hours, with the No. 30 finishing 11th in class, and the No. 31 16th in class.

The team sported special edition liveries for the legendary race, taking John Paul Mitchell Systems on as a primary sponsor. Following the race, Tequila Patrón ESM will return to its regular liveries, boasting the black and bright green look that has become a fan favorite in the WEC paddock.  Next month, the WEC championship resumes at the 6 Hours of Nürburgring, July 24th. First, the team will journey back to the states for the IMSA WeatherTech Championship 6 Hours of the Glen at Watkins Glen International, June 30 – July 3.

Scott Sharp
It was a rough race for Tequila Patrón ESM with John Paul Mitchell Systems sponsorship. Sometimes you are the windshield, sometimes you are the bug. Everything went great for us at Daytona. We slid through it, stayed out of trouble and everything was perfect. You’re not going to get a lot of 24 hours races that are that way. This one wasn’t for us

Ed Brown
Everyone did a great job this weekend. That was such a tough one, but the crew performed so well. IT was a long week, and at times, a frustrating race, but the car was great. We just lacked overall speed, but still gave it our all. I enjoyed sharing it with John Paul and John Paul Mitchell Systems. It was great to have them on board for our biggest race of the year. Now we’ll just look ahead to Nürburgring.

Johannes van Overbeek
Another 24 Hours of Le Mans is in the books. I have a good record of finishing this race. I’ve finished 5 out of 6, which I guess is an accomplishment. We struggled today, top to bottom, but the team persevered. The Paul Mitchell car ran great, we just didn’t have the speed. The pit stops were awesome as usual. Scott and Ed drove awesome. I’m sorry the sister car had so many problems with their WEC Championship. I’m happy everyone is in one piece and on to the next one.

Ryan Dalziel
We did everything correctly and our strategy was good to aim for fuel mileage, since we knew we didn’t have outright speed. We were one of the few cars that could consistently get to 12 laps, and we could have skipped a couple cars for sure. It helped us catch back up after our first suspension failure. We just were playing catch up from there. I think there was only one WEC car in front of us, points-wise. It would have bene a good finish, but we had the second failure that just put us so far back. There was a pretty bad vibration between the drivers before me and me, and for me, it seemed to magnify. We’re not sure what caused it. It is what it is. All it all, it was a disappointing day. The team did a great job. The pit stops were perfect and the strategy was good. The car was really nice to drive during the race. I don’t think we could have done anything more. The guys did a hell of a job.

Pipo Derani
We didn’t have enough drive time like we wanted. Unfortunately, we had two broken suspensions and we had to come back into the garage and try to put the car back together to cross the finish line and make some points. At least we managed to bring in some points, but it’s very disappointing to finish the most important race of the year like this, but we’ll be back next year.