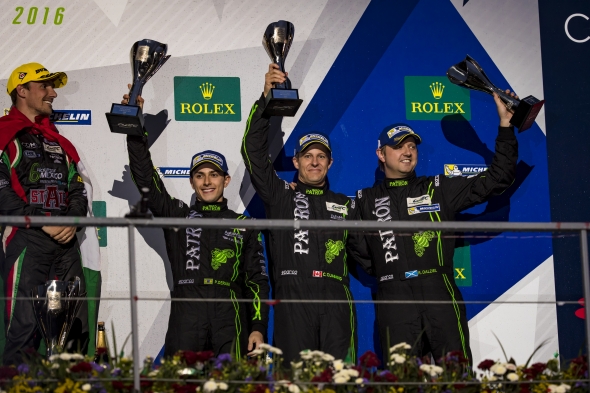 A quick early stint spin but masterful recovery for Chris Cumming brought the No. 31 to seventh position, and contact from another car forced him to make an unscheduled pit stop, switching out the damaged nose of the car for a fresh one. Two hours in, the team ran eighth and ninth before the next round of driver changes. Ryan Dalziel and Scott Sharp were the next drivers to take over the No. 31 and No. 30. As the 6 Hours of Mexico reached the halfway point, the skies opened and rain started to come down over the first corners of the 2.674 circuit. As the rain clouds expanded over the rest of the track, the engineers made the call to bring Dalziel and Sharp into pit lane for full tanks of fuel, rain tires, and the next pair of drivers. After starting his stint in eighth, Dalziel pitted again in fourth to put Derani back at the wheel, and Sharp passed the driving duties back to van Overbeek with two hours remaining.

As the rain started to let up with 90 minutes remaining, both cars were among the first to pit for slick tires. After rejoining, the No. 31 continued to run in fifth, an impressive feat after multiple hurdles throughout the previous five hours. In a final hour push, Derani was on a mission. Just after setting the fastest lap of the race for the car, he passed the Greaves Motorsport No. 41, and made a charge to catch up to the podium positions ahead. Johannes van Overbeek continued to push in ninth, maintaining position until Scott Sharp took over for the final hour.

As the first team to complete the final round of pit stops, all eyes were focused forward. Derani pushed in fifth with a half hour remaining, and as the final pit stops for the field were completed, drama hit for the race leader. The No. 42 LMP car suffered brake troubles, forcing the team to complete repairs back at the garage. Because of the strong strategy call by the engineers, the black and green No. 31 cycled through to third place at the 20 minute mark. Derani maintained position during the again wet conditions, bringing the No. 31 Ligier home in third, much to the celebration of the Patrón employees in attendance.

With little time to rest, the FIA World Endurance Championship continues its North American rounds, now crossing the border to the United States to compete at Circuit of the Americas in Austin, Texas, September 17. The event will run in conjunction with the IMSA WeatherTech Series, in which Tequila Patrón ESM will compete in later this month for Petit Le Mans at Road Atlanta.

Scott Sharp // No. 30 Ligier JS P2 Nissan
Rough race for our car today. It’s an amazing challenge for all the drivers out there with ever changing conditions. You see this rain cloud take 10 minutes to come across the track and literally soak each area. We were all over the track, sliding around, and then other parts of the track were drying. It was a bit precarious. We all hung in there. Ed did a great stint. It was probably is best stint of the year. Once again, hats off to the No. 31 team. It was looking a little bleak early in the race. They were down eighth or ninth at one point and rallied to get a podium again. Hats off to them.

Ed Brown // No. 30 Ligier JS P2 Nissan
Not a bad day. The 31 one car has a lucky charm on it. It was a good turnout. Having all my employees here. They made an 18 hour treck total to come here and watch. For one of the cars to get on the podium was great. Our good friends Ricardo and RGR to win their home race was pretty special. I had my best stint of the year. I ran my fastest laps of the week, mistake free. There were rough conditions for everyone.  All in all, it was a good day.

Johannes van Overbeek // No. 30 Ligier JS P2 Nissan
I’m really happy for the 31 car. They had a lot of issues, but really persevered. Ed drove one of the best stints he ever has. I’m really happy about that. Scott did a great job as usual. The results are a bit disappointing, but the conditions were tough. Other than one little bump, we didn’t have any issues or accidents. I’m looking forward to Austin.

Ryan Dalziel // No. 31 Ligier JS P2 Nissan
Great result today. The goal was to keep learning the Michelins, and to try to get a podium for our sponsor’s home crowd. We had over 700 guests here and our factory is just a drive away. Great result. We definitely got a little bit lucky, but we also go an unlucky start with people using us as a ping pong ball for the first hour. It came back to us, and I’m super happy for the guys. We had a great strategy and the car was pretty good in the race. It seemed like we had a good race pace. On to Circuit of the Americas, which is the team’s only home race, as far as racing in the United States. We’re looking forward to going there and we’re still looking for our first WEC win of the year.

Pipo Derani // No. 31 Ligier JS P2 Nissan
Finally another podium. The beginning of the race was full of accidents and contact, it’s very rewarding. The team did a great job to bring us back from where we were. I’m very happy for Ricardo Gonzales as well. Winning at his home race is very nice. Now let’s focus on continuing this podium streak in the championship. It was amazing to win a podium here. This was the home race for Patrón, and Patrón was on our cars, as well as Ricardo’s.  For those 700 guests, it’s nice to get that podium for them.