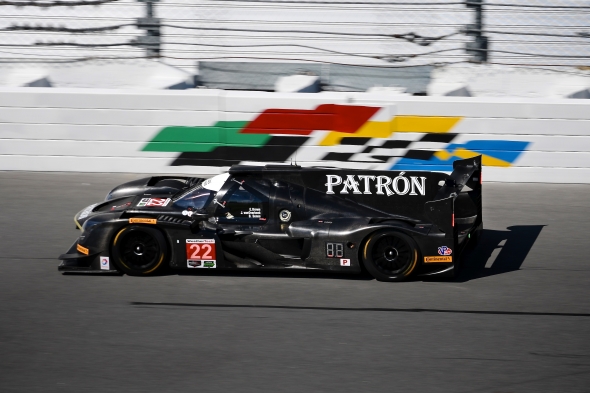 DAYTONA BEACH, Fla., — After taking delivery of two brand new Nissan Onroak DPi race cars within the last two weeks, Tequila Patrón ESM has completed its first official IMSA WeatherTech SportsCar Championship test, the Roar Before the 24. Armed with its two full season entries, four of the six drivers were able to run laps at Daytona International Speedway over the course of the three day test, gathering valuable data for the Rolex 24 at Daytona, which will take place later this month.

While the team had completed a shakedown with one car two weeks prior at Sebring International Raceway, the second car arrived less than a week before this week’s Daytona test. Scott Sharp, Ryan Dalziel, and Pipo Derani ran a total of 77 laps in four sessions, working through item by item the checklist of tasks required to be completed with a new car. The No. 2 Nissan Onroak DPi performed well as the drivers gave engineers continuous feedback, frequently pitting for adjustments, dialing in on the car’s optimal setup.

The No. 22 Nissan Onroak DPi competed a total of 119 laps in six sessions, splitting the drive time between Ed Brown, Johannes van Overbeek, and Bruno Senna. The fourth driver, Brendon Hartley, was unable to attend, but will be present for race week later this month. Needing further work at the shop, the team retired the No. 22 early, preparing the car for a private test at Sebring International Raceway on Monday.

Both cars ran the entirety of the test without their usual black and bright green Tequila Patrón liveries, the 2017 version of which will be revealed in the days before the Rolex 24 at Daytona. The team will run both cars in the 10-race 2017 IMSA WeatherTech SportsCar Championship schedule, starting with the Rolex 24 at Daytona, January 26-29, 2017. For ticket and schedule information, visit imsa.com.

Scott Sharp | No. 2 Nissan Onroak DPi
It was fantastic to see both Tequila Patron ESM Nissan Onroaks running at Daytona! Huge thank you to the team for their incredible work to get everything together. The 22 car never turned a wheel till Friday morning! We are behind the rest of the field in terms of preparation time, but we  turned a bunch of laps, have a lot of data and won’t step off the throttle from now till the race!

Ryan Dalziel | No. 2 Nissan Onroak DPi
The test was good. We learned a lot about the car. Our speed is pretty good right now. We got through a couple of gremlins that we know we need to address and strengthen for the race. All in all, especially on the No. 2 car side, we are pretty happy. All the drivers got a decent amount of seat time. I feel like we got through a majority of stuff on the list that we wanted to try. You never feel like you have enough time at the Roar. The car is in one piece, and we’ll be ready for the race. It’s pretty different from last year’s car. There is probably more similarities between the Ligier HPD and the Ligier Nissan from last year because the twin turbo, six cylinder is quite similar. The car is much better than last year, I find. It is much more user friendly. It’s easier for me personally to drive this year’s over last year’s. I think Continental Tire made a big step forward over last year’s. All in all, it is always hard to leave this test and know where you stand, but I think that as a team we know the areas that we have to address in the next couple weeks. We’ll do our best with the time available to address them all.

Pipo Derani | No. 2 Nissan Onroak DPi
We didn’t have as many laps as we wanted. I think that was expected, considering our project basically started here at the Roar. We got a few laps in, which is very useful data for us to move forward with. We’ve made progress these three days, which is important considering the race is almost here. We need to put all this information together and pick up the biggest places we need to improve to be able to arrive here during the race week with a car that is ready to race. At the moment, we’re not quite there yet, but that’s normal. So far, so good. The car handles well. It’s not easy to put everything together. There are so many variables to make it work. When we drove here last year, that car already had three years under its belt. There wasn’t much left to be developed. Now we have a new car, new chassis and new electronics. It drives similar, because of the engines being more or less the same, with cylinders and turbos. So far, the handling of the car is great. There’s a little bit to be improved, but we’ll get there.

Ed Brown | No. 22 Nissan Onroak DPi
It’s been an up and down test. The first day, we had a couple mechanical issues, the second day we had weather. This morning, it was solid and we’re getting some good miles in. We’re better off than at some shakedowns we’ve had before. The chassis comes from a proven manufacturer, and they’ve improved on what it was. The engine is a proven source too. We’re ahead of the game there.

Johannes van Overbeek | No. 22 Nissan Onroak DPi
All in all, it was a productive test. We learned a lot, and it was great to work with Bruno Senna for the first time. Ed drove his best laps ever at Daytona. We still have some teething issues to roll out in the Tequila Patrón Nissan Onroak DPi, but the chassis is really good, and hopefully with a little BOP help, we’ll be more in the hunt. All in all, it was a very encouraging test.

Bruno Senna | No. 22 Nissan Onroak DPi
It was a great pleasure to kick off work with the team and I think we have a lot of work to do, but it’s an exciting time to be able to develop a car and a relationship with the team. This is my first time at Daytona, and it was special to experience the banking—that was a new thing for me. I hope to get lots of miles in the car between now and the race. We know we still need to get a bit more performance before we can properly compete with the other guys. But the race is long, and we’re ready to fight. We’re working strong together and I’m looking forward to it.