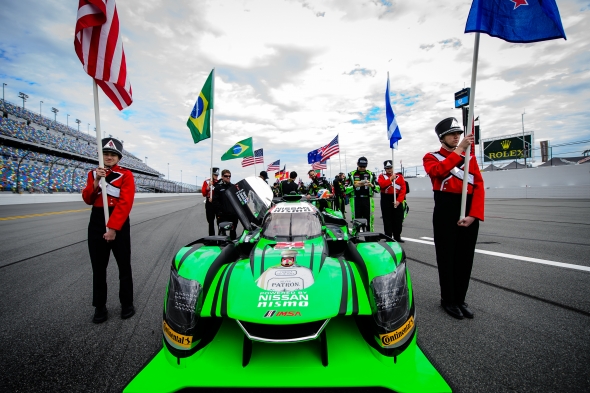 Just one month after taking delivery of their Nissan Onroak DPi race cars, Tequila Patrón ESM celebrated a top five finish at the Rolex 24 at Daytona this weekend. The Florida based team kicked off the 2017 IMSA WeatherTech SportsCar Championship with the longest race of the season, hosted at Daytona International Raceway.  With limited testing of the new machines, the team utilized every practice session to the best of their ability to prepare for the 55th annual running of the endurance event.

Brendon Hartley led the team charge in qualifying, setting a fast lap to earn a fifth place starting position for the No. 22 Nissan Onroak DPi. Full season driver Ryan Dalziel and the No. 2 Nissan Onroak DPi started the race in sixth position. The field of 55 cars showed a clean start, with Hartley slipping to sixth position and Dalziel eighth by the first caution ten minutes after the green flag. With 24 hours of racing ahead, the drivers and engineers at Tequila Patrón ESM knew to play the first two thirds of the race safe. However in his opening stint, Dalziel found himself forced off track twice, narrowly escaping any critical damage. Thirty minutes into his stint, Hartley also radioed to the team he suffered early contact as well, with minimal damage.  Hartley climbed back to fifth before passing the driving duties to the No. 22 car to Ed Brown. Ed rejoined in sixth as Dalziel took fifth place as the second full course caution came out.

Dalziel continued his climb, sitting fourth as he concluded his stint. After the driver of the No. 2 reported a vibration, the team called him in, performed a thorough check on the car and put Scott Sharp in for his first laps of the race.  Three hours in to the race, Brown and the No. 22 held seventh place, while Sharp charged his way up from ninth. As dusk descended on the track, Brown maintained his position before Johannes van Overbeek took over under caution, advancing to sixth before his stint ended. At the five hour mark, Pipo Derani replaced Sharp as a storm cell descended on Daytona Beach. An hour later, Bruno Senna in the No. 22 charged forward in fourth and Derani in sixth in increasingly wet conditions.

Temperatures continued to drop as the rain came down, and the team used cautions, pass around procedures, and quick pit stops to get both cars back on the lead lap. With eight hours complete, Senna brought the No. 22 up to second before Brendon Hartley look over, and Derani held fifth place to pass to Ryan Dalziel. After nine hours and 272 laps, Hartley led his first laps of the race. Hartley later pitted for fuel, losing his lead, only to reclaim it shortly later.

Heartbreak occurred at 12:26AM on Sunday morning when race leader Brendon Hartley radioed to tell the team he had been hit ten hours running. Contact with a lapped car disabled the No. 22 Nissan Onroak DPi, resulting in the team spending 26 laps in the garage for repairs. Meanwhile, back on track, Dalziel kept the No. 2 on pace in fourth during his triple stint, handing the wheel over to Sharp for a difficult session in the wet during the early morning hours.

For the next ten hours, the race alternated between green flag racing and full course cautions as the rain continued to pour down on track. With 21 hours of racing complete, the field had spent a third of the race under caution. Dalziel, Sharp, and Senna kept the No. 2 in fourth, while Hartley, van Overbeek, and Senna ran the No. 22 in tenth. After almost 14 hours of racing in the wet, the track finally started to dry at 10:30AM, allowing the cars to switch back from rain tires to slicks. True to fashion, car failures and racing incidents increased as the field closed in on the final hours. The Nissan Onroak DPi cars continued to hold strong, and the No. 22 climbed from tenth to finish seventh, and the No. 2 finished fourth.

Scott Sharp | No. 2 Tequila Patrón ESM Nissan Onroak DPi
It was a learning weekend for Tequila Patrón ESM. We continued in the growth curve of our new on Nissan Onroak DPi prototypes. We are working our way through small teething issues, but practiced and qualified well! Unfortunately in the race both cars dealt with lower top MPH than expected. At this point we are still sorting components in this new package and we had some sealing issues with the engine. Still, our entire group–ESM, Onroak and Nissan-Nismo– pushed through and both brand new cars finished, and finished very respectively in 4th and 7th! Thanks to everyone! All drivers did a tremendous job in some of the most difficult circumstances I have ever seen!

Ryan Dalziel | No. 2 Tequila Patrón ESM Nissan Onroak DPi
All in all, it was a great race. We proved that we were reliable. The No. 22 car, showed speed early on. I think we have all the ingredients to have a good car. To think that these cars are a little over a month old, what everyone at Nissan, NISMO, Onroak, and Patrón ESM have done was an excellent job. It’s not the result Tequila Patrón ESM wanted as defending champions of the race, but we’re probably as equally as satisfied with this result as we would have been with a win.  With what we had and the time we had to do it, I’m really proud of the guys. I have massive amounts of respect for all the long, hard hours they put in, and hopefully they get a couple weeks off.

Pipo Derani | No. 2 Tequila Patrón ESM Nissan Onroak DPi
We are all very happy to finish this race. The fourth place comes with a small taste of victory for us, considering our product is very new. To be able to finish this race is more than we could possibly imagine yesterday, or even a few days ago. For the first race of the new Nissan Onroak DPi, I am very proud of the team, of Nissan, and everyone involved. I wanted to thank them all for their great support, and we look forward to getting better from here and onto Sebring.

Ed Brown | No. 22 Tequila Patrón ESM Nissan Onroak DPi
Wow, that was a race, and talk about tough conditions! What an amazing job our entire team did to get two new cars to finish, so proud! Thanks to our partners at Ligier and Nissan NISMO for all the support. We will only get better as the year goes on. We have the best team and drivers thanks again to everyone.

Johannes van Overbeek | No. 22 Tequila Patrón ESM Nissan Onroak DPi
To finish Daytona is a feat. To do it with two brand new cars is a testament to Tequila Patrón ESM and our partners at Onroak and NISMO. It was a tough and challenging event but to do it with such a great group of people and co-drivers made it feel much more like fun than work. I’m looking forward to Sebring.

Bruno Senna | No. 22 Tequila Patrón ESM Nissan Onroak DPi
My first Daytona experience was a truly memorable one. I really enjoyed my time with the Patrón ESM team and all my new teammates who did a great job throughout the event! It was a tough baptism for the brand-new Nissan Onroak, but it made through the grueling conditions and I’m sure we’ll just get stronger from here. I’m looking forward to Sebring!

Brendon Hartley | No. 22 Tequila Patrón ESM Nissan Onroak DPi
I had a great first experience with Tequila Patrón ESM. Considering it was a late project, I think the team can be very proud of the effort and result we had in challenging conditions. With a couple of the minor issues ironed out, we will be in good shape for Sebring.