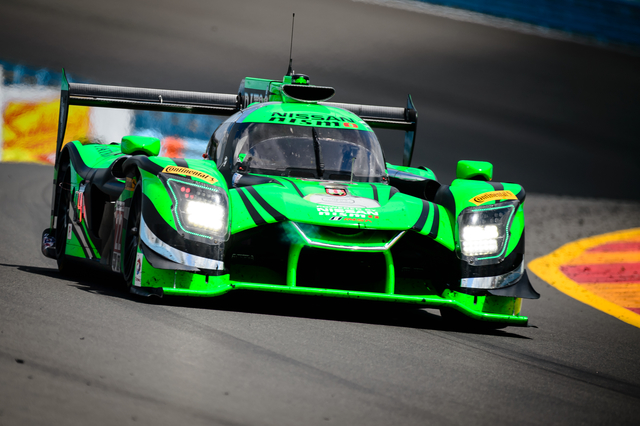 BOWMANVILLE, Ont., — After a disappointing end to a strong weekend at the Sahlen’s Six Hours of the Glen, Tequila Patrón ESM will be offered a chance at redemption this weekend at Canadian Tire Motorsport Park. Just days after both cars retired early from the six hour endurance event, the team has arrived at the next stop on the IMSA WeatherTech SportsCar Championship calendar.

The development of the new Nissan Onroak DPi program showed impressive improvements at Watkins Glen, as the team earned their first pole position of the year and followed up the qualifying performance with both cars leading several stints during the event. The newfound speed and performance in the pair of cars will carry over to Canadian Tire Motorsport Park, where the team earned a podium finish in 2013 with Scott Sharp and Guy Cosmo.

This weekend marks the first weekend that Pipo Derani will take over for Patrón Spirits President and CEO Ed Brown, joining Johannes van Overbeek in the No. 22 Nissan Onroak DPi. Brown announced his retirement from Prototype racing before the race at Watkins Glen, but emergency surgery kept him out of the car on his finale weekend. Derani joined full season drivers Scott Sharp and Ryan Dalziel in the No. 2 Nissan Onroak DPi, but will switch to the sister car for the remainder of the season.

Scott Sharp
I’m super excited to be back at Canadian Tire Motorsport Park, a lady of a dying breed! It is just an amazing high speed circuit! After such a promising event at Watkins Glen, Tequila Patrón ESM remains excited about the potential for a super strong weekend.

Ryan Dalziel
Watkins Glen weekend had so many highs, but unfortunately it ended on a low for the Patrón ESM Nissan DPis. I think we have found good speed in the cars and we will learn from the mistakes we made last weekend. I’ve already driven at Canadian Tire Motorsport Park earlier this year so I’m looking forward to going there and having a trouble free race. If we can do that I’m confident we can finish up front.

Pipo Derani
I’m now officially filling in for Ed. I’m really excited to continue this new chapter with Tequila Patrón ESM. I’m really looking forward to learning this new track. I heard the track is really nice. It’s really fast and should suit our car like the Glen. Let’s hope this time around, we can show the true potential of the car by finishing the race where we need to. Winning a race would be great. We had quick car in Watkins glen, and unfortunately we didn’t get to the end. Hopefully, we can turn things around. The team is really pumped up and working hard for it. I’m looking forward to driving at Canadian Tire Motorsport Park.