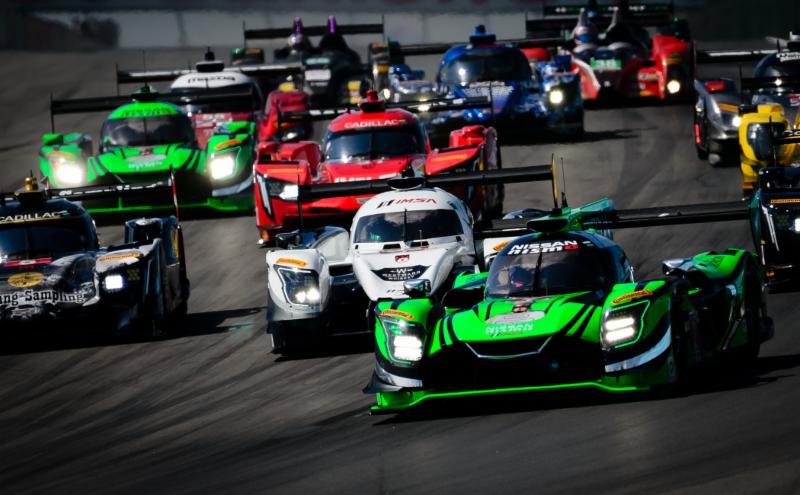 WATKINS GLEN, NY., -- The Sahlen's Six Hours of the Glen started out promising this weekend for the Tequila Patrón ESM squad, but attrition took both Nissan Onroak DPis out of the endurance race before the checker flag.

Both cars arrived at Watkins Glen International and immediately showed strong speeds. Brazilian Pipo Derani qualified on pole position in the No. 2, earning the team's second pole at the Glen in two years. Last year's pole sitter Johannes van Overbeek set a position to start fifth. Derani led the field to green and pulled away from Olivier Pla and the rest of the field to create a two second gap in the first ten minutes. Van Overbeek and the No. 22 lost a position on the start to run sixth, but stayed close to the No. 85 car and made a daring pass on the outside to take the position back in the first ten minutes. On lap 14, Pla took the lead and Derani stayed close, biding his time with five and a half hours left in the race. Strong pit strategy by the team during the first round of stops brought Derani back to the lead, and kept van Overbeek in fifth position. Derani pulled away from the field to hold a 17 second lead over Christian Fittipaldi at the one hour mark. In the No. 22, van Overbeek gained ground with every lap, running in fourth and quickly reeling in third. He pitted in 75 minutes running, and passed the wheel on to his only co-driver of the weekend, Bruno Senna. Derani pitted the No. 2 from the lead and gave the car to Scott Sharp, who rejoined with an 11 second lead.

Sharp increased the lead to 14 seconds and was running a smooth stint when contact from the 75 GTD car sent the No. 2 Nissan Onroak DPi off course and into the wall. With a flat right rear tire, Scott brought the injured car back to pit lane for the team to assess the damage. The team quickly ran a check on the car, replaced the rear body work, and set Sharp back out with no apparent issues. Upon exit, the field went yellow, and Sharp accidently left a closed pit, resulting in a drive through penalty to be served under green conditions. The team then received an additional penalty for fueling the car while making repairs, eventually putting the are three laps down. The contact of the No. 2 car moved the sister No. 22 car and Senna up to third position. Senna pitted under yellow and rejoined in fourth, seven seconds within the overall leader.

With two hours completed, Sharp and the No. 2 ran three laps down, optimistic that the speed of the Nissan Onroak DPi and likelihood of cautions would get them back on the lead lap and in the battle for the win. While cautions did breed cautions, the position of the No. 2 prohibited the team from taking advantage of the pass around procedure, staying three laps down. While the trouble continued for the No. 2 car, the No. 22 car began its climb to the front. Ninety-two laps into the race, Senna took the overall lead under caution. He led the field to green, quickly creating a nine second gap on the field. Meanwhile, Ryan Dalziel took over for Scott in the No. 2 in seventh, but was forced to serve another drive through penalty in his opening laps. Senna lost his 14 second lead when another caution came out at the halfway point. He led the field back to green and continued to stay in front as the fourth yellow flag came out.

Senna pitted after caution and van Overbeek resumed his driving duties, but the No. 22 lost the race out of pit lane, rejoining in sixth position, with Dalziel three laps down in seventh. The No. 22 Nissan continued to show strong speed it produced all weekend long, and in no time, van Overbeek was back in the top three with less than two hours to go.

With just over 90 minutes remaining, Derani returned to the No. 2 for his next stint, rejoining the field in seventh, two laps down. With bad luck again striking the pole sitting car, Derani was called back into pit lane to serve and additional drive through penalty due to the wheels spinning while the car was on the air jacks in pit lane during the pit stop. Despite the continued setbacks, pole sitter continued to set the fastest laps of the race. In the final hour, Senna stopped on track in turn one as the No. 22 lost oil pressure, ending his race early. With 36 minutes remaining, Watkins Glen delivered its final blow to the No. 2 car, as Derani stopped then slowed on track. Struggling with a throttle issue, Derani was able to crawl back to pit lane, allowing the team to plug into the car's data and diagnose the problem. A few minutes later, the team gave Derani permission to get out of the car, noting the race was done for the team's remaining entry.

From Watkins Glen, the team will journey north to Canadian Tire Motorsport Park in Bowmanville Ontario for the next round of the 2017 championship, July 7-9. For more information, visit imsa.com.

Scott Sharp | No. 2 Nissan Onroak DPi
Wow. What a crazy change of events during the day. In so many ways, it was a great weekend that we desperately needed. We stepped up in performance, and showed what we can do. We were competitive in practice, put the car on pole, led the early part of the race and both cars were strong. The team did a fantastic job and it all went away for a variety of reasons.

Ryan Dalziel | No. 2 Nissan Onroak DPi
That was a difficult one to take. We had great speed this weekend. We felt like we had been lacking in speed, and we've now found the pace in the car. It's a shame because the No. 2 and No. 22 were at the top of the field. There wasn't one of those days were it went correctly. There were a lot of issues, and that's part of a development program. People forget how new this is. We have three different packages: a great team, a great engine, and a great chassis. It's the first time all three tied together, so it's a work in progress. There's a lot for us to be proud of, as well as disappointed with. We have it for the next race, and we'll go kick some butt in Canada.

Pipo Derani | No. 2 Nissan Onroak DPi
It was a tough day for us. We showed a lot of promise in the weekend since the beginning with a fast car and pole position. Unfortunately, we hit trouble at the end which cost us a chance at fighting. In my case, our car had an incident and we fought back to be one lap down. We were just about to get that lap back with a yellow, but unfortunately I had a problem with the throttle. It is what it is, and we'll look at everything, analyze it, and come back stronger.

Johannes van Overbeek | No. 22 Nissan Onroak DPi
It was a frustrating day. Tequila Patrón ESM did a great job with stops and strategy. Bruno did a great job behind the wheel. We were up front for some of the race, and were looking forward to the end of the race. However, we struggled all day with a lack of power and electrical gremlins, which finally took its toll. Onto Canadian Tire Motorsport Park.

Bruno Senna | No. 2 Nissan Onroak DPi
It's a shame we retired. We had really good pace and I felt good in the car. We were looking forward to potentially finishing on the podium, and we were really fighting for the sharp end for this one. Lesson learned, and we will go for it at the next one.