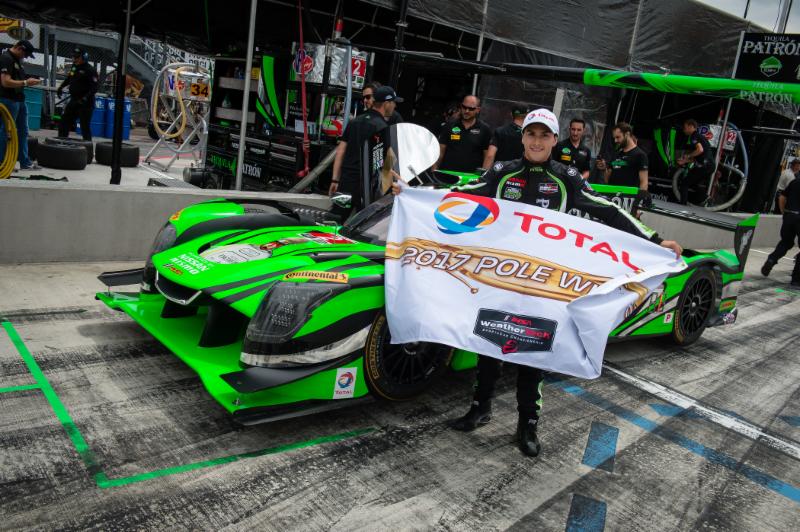 Derani initially held provisional pole early in the session, but Olivier Pla showed competitive speeds, taking the position back. Derani pushed on, reclaiming the position. With one lap left, Derani again set a fast time, setting the fastest lap with a time of 1:34.405. In the No. 22, Johannes van Overbeek also showed the Nissan's competitive lap times, setting a fast time to sit in third position. As the car began to settle in to set a qualifying lap, the team noticed issues with the boost, forcing van Overbeek to make a quick pit stop. He rejoined the field, securing a fifth place starting position for Sunday's race.

The back-to-back pole position reaffirms the progress the team has continued to make throughout the 2017 race season. Earlier this week, Ed Brown announced his retirement from prototype cars to focus on his business commitments as the Patrón Spirits President and CEO. Following this weekend's Sahlen's Six Hours of the Glen, Derani will replace Brown in the No. 22 Nissan, alongside co-driver Johannes van Overbeek.

The team showed strong potential in 2016 at the Glen, when an engine failure took the Patrón car out of the race. Derani will lead the field to green on Sunday at 10:00AM on FOX Sports 1.

Pipo Derani | Qualified P1 | Best lap of 1:34.405
It was a very good qualifying session. We rolled out of the truck this weekend with a good car. The team has been doing a great job in the shop. Since the beginning of the year, everyone has been working really hard to get the car to where it should be. During the whole weekend, we did minor tweaks just to adapt to the weather conditions, but in general the car was pretty good. To be on pole shows the work has paid off. It feels good to be on pole, but it's a long race. Now we need to focus on the finish. It's amazing. Ed is my lucky start. To be able to represent him and the whole team with a pole position is very special. It's my return to the team after Sebring, so it feels very special. I think a win would be even better.

Johannes van Overbeek | Qualified P2 | Best lap of 1:35.637
Congratulations to Pipo for getting pole position. The No. 22 car had boost issues. We pitted just as the car was coming in, and slipped from third to fifth. It was frustrating, but at least we know we have a good car.