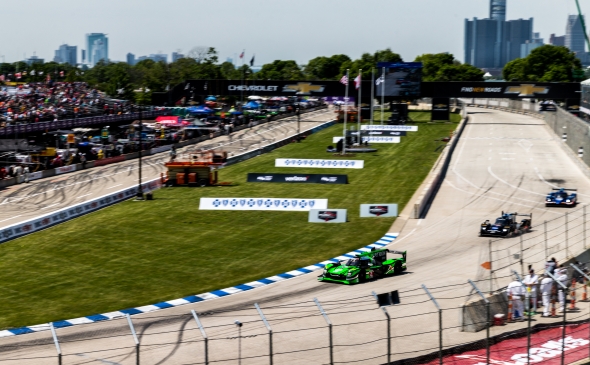 DETROIT, MI., — The streets of Detroit paid Tequila Patrón ESM no favors this weekend for round five of the IMSA WeatherTech SportsCar Championship. The bumpy 2.3 mile, 14 turn street circuit challenged the team all weekend, resulting in a best finish of seventh place for the team at the Chevrolet SportsCar Grand Prix.

With two long practices, the team worked hard to master the street circuit, looking for a set up to best handle the rough course over the duration of the 100-minutes race. The duo of Nissan Onroak DPi cars looked strong in Prototype qualifying until a crash from the pole sitter canceled the reminder of the session. The field started by points, putting Scott Sharp and the No. 2 Nissan Onroak DPi to start fourth, and Ed Brown in the No. 22 to start sixth.

The drivers kept the cars clean in the opening laps, slipping to sixth and tenth. A full course caution came out on lap 19, and both cars pitted under caution for full service stops. Ryan Dalziel took over the No. 2 to rejoin in eighth, and Johannes van Overbeek in 10th with an hour remaining on the race clock. As Dalziel gained a spot to race in seventh, the Tequila Patrón ESM engineers called the No. 2 into the pits as the first prototype to make its final pit stop for a splash of fuel. In the laps to follow, competitors in the prototype field followed suit, pitting early for their last load of fuel. Meanwhile, the No. 22 Nissan Onroak DPi, running in fifth, chose a different strategy, conserving fuel in hopes that another caution would appear. With 30 minutes to go, van Overbeek raced competitively in fourth, fending off the No. 5 Cadillac DPi for position. Ten minutes remained on the race clock with no caution in sight when the team called the No. 22 in for its splash of fuel. The car rejoined in seventh, where it ultimately finished. The strategy for the No. 2 was working well until Dalziel radioed to the team, informing the engineers that something in the rear of the car failed, after struggling for most of the race. Dalziel was able to continue and slowly brought the car back to the garage with less than ten minutes to go.

Later this month, Tequila Patrón ESM will return to Watkins Glen International in New York for the Six Hours of the Glen. The six hour race marks the third of four races in the Tequila Patrón North American Endurance Cup; a four race endurance championship within the existing full season championship. Johannes van Overbeek won pole position, and the team had a shot at the podium until a mechanical issue on the Honda took the team out of contention in the final half.

Scott Sharp | No. 2 Nissan Onroak DPi
It was such a rough weekend for Tequila Patrón ESM! We struggled to get the car compliant and comfortable over all the bumpy rough areas and eventually that took its toll in the race. Great effort by all, and we will keep pushing to improve our cars. Onto Watkins Glen!

Ryan Dalziel | No. 2 Nissan Onroak DPi
Really tough day for the No. 2 car. We had something wrong at the rear of the car and it gradually worsened, so we were just trying to get to the finish. Unfortunately it gave up towards the end of the race. Good news is it explained why our pace was off the leaders. Bad news is something failed. Time to put these few bad races behind us and regroup for Watkins Glen Six Hour.

Ed Brown | No. 22 Nissan Onroak DPi
Another tough weekend for the Tequila Patrón ESM squad. The 22 car got better and better throughout the weekend. As usual, the entire team did an outstanding job.

Johannes van Overbeek | No. 22 Nissan Onroak DPi
The No. 22 Tequila Patrón ESM guys did about as good as we could have done today. The strategy, set up, pit stops, driver change, and Ed’s stint were all spot on. Towards the end we we’re running a competitive fourth but hoping for a yellow that never came. In the end, we had to stop for fuel which shuffled us back to seventh place in the end.