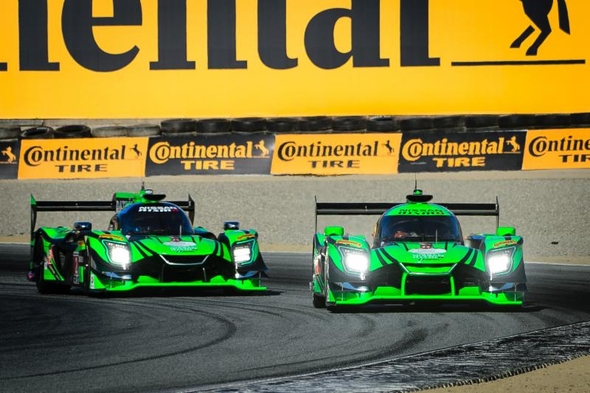 MONTEREY, Cal., - The America's 250 proved to be a challenging race event for Tequila Patrón ESM at Mazda Raceway Laguna Seca. Despite showing strong improvement and quick speeds during the three practice sessions, the pair of Nissan OnRoak DPis struggled in qualifying and the race, earning a sixth and an eighth place finish.

During the three practice sessions, the drivers and engineers of the No. 2 and No. 22 Nissan Onroak DPis pursued the optimal balance for the cars, getting closer to the ideal settings with each session. In qualifying, warmer temperatures changed the overall balance of the cars and tires, resulting in Scott Sharp and Johannes van Overbeek qualifying in sixth and seventh respectively.

Race day brought the warmest temperatures of the week, further offsetting the balance of the cars as the field took the green flag. Sharp and van Overbeek showed steady pace in their opening stints, but the lack of pace and rear grip hindered the pair of Nissans from charging through the field. As the first round of pit stops cycled through, both cars maintained position, continuing to race in sixth and seventh.

As the race progressed, Pipo Derani took over the No. 22 from van Overbeek, which had fallen off the lead lap to race in eighth. Sharp passed the No. 2 off to Ryan Dalziel, who continued to push in sixth, struggling with balance and tire grip.  The two Nissans maintained position for the next 80 minutes, unable to gain position, but able to keep the same pace. Dalziel and the No. 2 finished in sixth position, and the No. 22, unable to get a pass around under caution, finished in eighth.

In less than two weeks, the 2017 season will conclude at the 20th anniversary of Petit Le Mans at Road Atlanta, October 4-7. Brendon Hartley will return to join Scott Sharp and Ryan Dalziel in the No. 2 Nissan Onroak DPi, and Bruno Senna will fill the third seat in the No. 22 alongside Johannes van Overbeek and Pipo Derani for the ten hour endurance event.

Driver Quotes
Scott Sharp | No. 2 Nissan Onroak DPi
This race was certainly not the day we hoped for. We had flashes of speed throughout the weekend, and were the fastest in one of the practices. But in qualifying and the race, both of our cars had different handling than before. As the heat came up, and the longer we ran, the looser we would get. We'd try a bunch of changes to circumvent that, but it still happened. We did the best we could do, but we'll move on. Petit Le Mans should be a better race.

Ryan Dalziel | No. 2 Nissan Onroak DPi
It was a tough race for us. At Road America, we were pretty dominate as a team. Throughout practice here in Monterey, it seemed like we had good pace. Then in the race, we struggled just as much as we did in qualifying, which had similar weather conditions. The cars were difficult to drive. They both had the same balance, and struggled to keep the pace. We'll put our thinking caps on for Petit Le Mans, and finish the season strong.

Johannes van Overbeek | No. 22 Nissan Onroak DPi
This weekend was the exact opposite of our previous race weekend for Tequila Patrón ESM. We struggled all weekend. The guys never gave up, and we got the car pretty decent during the race, but we just didn't quite have it to be on the podium. Pipo did a great job as usual, and I'm looking forward to Petit Le Mans.

Pipo Derani | No. 22 Nissan Onroak DPi
We didn't quite have the fastest car this weekend with outright pace. We knew to have any chance, we'd have to capitalizing on the mistakes of others and hope for a full course caution at the end. The problem is when I got in the car, we were a lap behind. From there on, we were just waiting to see if we could get a wave by, which we didn't. If we take the positives, we started with a car that was really far from where it should have been. We made massive changes every session, and we managed to find a car that had reasonable balance. We've learned a lot this weekend that we can take forward to the next one.