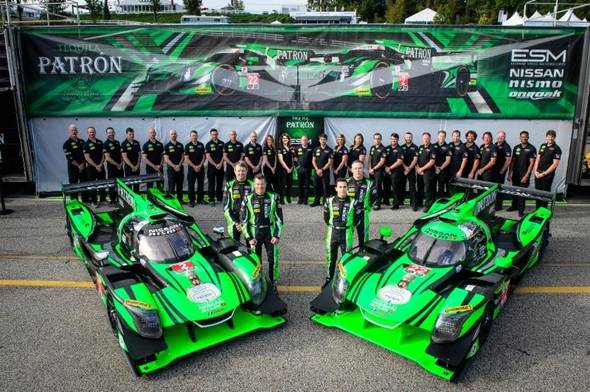 "Tequila Patrón ESM is ecstatic to announce that Nicolas and Olivier and will be joining our Tequila Patron North American Championship efforts in 2018," said Team Owner Scott Sharp. "Both have shown super strong speed on almost every track and every type of car they have driven.  They are truly both among the top echelon in sports car racing and will be tremendous additions to our team!"

An experienced racer in Europe, Nicolas Lapierre boats an impressive sports car racing resume, with 12 wins and an additional 13 podiums in the FIA World Endurance Championship, including two wins at the 24 Hours of Le Mans, since 2012.

"I'm delighted to join Tequila Patrón ESM," said Lapierre. "I have already taken part in a few IMSA races and I've always loved it. In a few occasions I raced against Tequila Patrón ESM and I know how competitive the team is. We will have a strong package next year."

Olivier Pla
With notable experience in both the FIA World Endurance Championship as well as the IMSA WeatherTech SportsCar Championship, Olivier Pla will also prove to be a strong asset to the team. The Onroak Development Driver turned Ford GT Racing driver won Petit Le Mans in 2016, finished second at the 24 Hours of Le Mans in 2013, and has earned four wins and an additional 12 podiums in the FIA World Endurance Championship.

"I'm delighted to join the Tequila Patrón ESM team for the endurance races in the NAEC," said Olivier Pla. "Racing against ESM in the past I know what they are capable of and I think we will have everything to perform at the very best."

The Tequila Patrón North American Endurance Cup will consist of four endurance races within the full season schedule, creating a championship within the championship. The Rolex 24 at Daytona, Twelve Hours of Sebring, Six Hours of the Glen, and Petit Le Mans will award competitors points at certain marks throughout each race, as well as at the conclusion of each race.

The first official series test of the upcoming season will commence at the Roar Before the 24 at Daytona International Speedway, January 6-8, 2018. The 2018 season will officially begin January 26-29 for the Rolex 24 at Daytona.