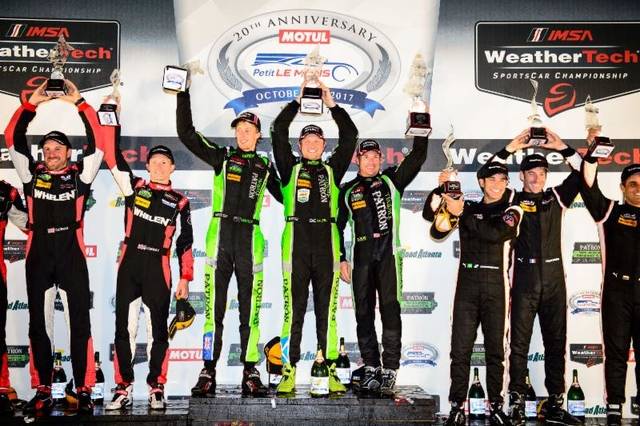 The team showed the progress of its development Nissan NISMO Onroak program in qualifying, setting both cars up on the grid to start the race in second and third. Brendon Hartley and the No. 2 Nissan Onroak DPi started second behind Penske Racing's Helio Castroneves. Pipo Derani and the No. 22 started third and drove down the front straight at the wave of the green flag to challenge Castroneves for the lead in the opening turns. In turn six on lap one. Derani took the lead from Castroneves and pulled away from the field. Hartley stayed close in third, fighting off heavy pressure from the No. 90 Visit Florida Ligier LMP2. The race started under damp conditions, resulting in both Tequila Patrón ESM cars to start on Continental Tire wets. Just ten minutes into the race, those in the field on rain tires pitted to take on slick tires, better for the track conditions.

The first full course caution came just twelve laps in to the race, with Derani leading the field and Hartley right behind in second. As the field when back to green, tires came up to optimal temperature, and the two Tequila Patrón Nissan Onroak DPis consistently set the fastest laps of the race, alternating the top spot between the two. As the Prototype field lapped the GT cars, traffic allowed Derani to create a three second gap over Hartley.

With one hour complete, Derani pitted from the lead to give the No. 22 to Bruno Senna, bringing the No. 2 of Hartley the lead position before he came in for his stop. Ryan Dalziel took over after the first full service stop and joined the field in first, with Senna charging in second. At the two hour mark, the duo continued to run first and second, and kept position after they made their second stops for tires and fuel. Senna took the lead after the stop, rejoining to set the fastest lap of the race to that point. Senna in the No. 2 held a 12 second lead over Dalziel, but the No. 22 quickly closed in, before a full course caution brought the two back together.

Both cars took the opportunity to pit under caution, with Scott Sharp taking over from Ryan Dalziel to turn his first laps of the race, joining in seventh, with Senna rejoining in fifth. The power of the Nissan brought Senna up to second on the restart, to run within a second of the race leading #85. Senna took the lead in lap 199 as the pair exited team ten, and quickly created a five second gap over the field. He pitted with a nine second lead, allowing van Overbeek to take over in good standing and take the lead with 146 laps of racing. Sharp pitted during the field's pit stop cycle, rejoining in seventh, to quickly take sixth and fight the #90 Ligier for fifth position. Sharp clinched fifth position, but trouble struck when contact from behind from the No. 85 forced the No. 2 to spin in turn ten. The car went a lap down as Sharp waited for a tow out of the gravel, and the 85 was serve a drive through penalty for the contact. Fortunately, the No. 2 suffered little damage and was able to continue as the No. 22 continued to lead the race.

Sharp continued to run laps in eighth, until it became time for the car's next full service stop, with Brendon Hartley taking the controls. The No. 22 of van Overbeek pitted for tires and fuel, and rejoined in third. A series of full course cautions allowed Hartley to get back on the lead lap and catch up with the rear of the prototype field to run sixth.

With six hours complete and four hours remaining in the race, van Overbeek and Hartley ran third and fourth respectively, maneuvering their way through traffic to avoid several on track incidents. Cautions bred cautions, and Hartley passed van Overbeek on a restart to take third, and aim to climb his way back to the top of the field. Hartley took the lead back on lap 203, and Senna took over from van Overbeek to rejoin in fifth position. As Senna climbed his way back to the front of the field, he suffered contact from the No. 85 in turn ten, spinning the 85, but Senna was able to continue without damage.

As the dust settled from a series of full course cautions, the pair of Tequila Patrón ESM Nissans again ran first and second, with Hartley leading Senna. Hartley ended his stint with an impressive 23.9 second lead, leaving Ryan Dalziel to take over the No. 2 with just over three hours remaining. Dalziel joined the field with a 17 second lead, and lap after lap pulled away from Senna in second to create a 24 second gap. GT traffic hampered Senna's run, resulting in a spin, followed by a quick recovery. Helio Castroneves in the No. 3 Penske Racing machine took advantage, sliding into second position while Senna recovered to third.

Two hours remained on the clock as dusk settled on Road Atlanta, and Derani took over Senna to rejoin the field in first, while telemetry issues resulted in an extra five seconds in the pit stop for Dalziel and the No. 22. Dalziel rejoined in third under caution, tucked behind the No. 5 of Joao Barbosa. Barbosa passed Derani on the restart to take the lead, and Dalziel shuffled to fourth. Tension built as the race clock showed 90 minutes remaining, and Derani used a restart to reclaim the top position and build an eight second lead over Barbosa. Trouble for the third place car moved Dalziel back up to third, where he pitted to let Brendon Hartley take over for the final hour.

The Tequila Patrón ESM pair again traded back and forth the fastest laps of the race, and Hartley climbed to second to race behind his teammate. With 27 minutes remaining, yet another full course caution came out, and contact with a GT car on the restart resulted in Derani being served with a drive through penalty as he led the field. The penalty moved Hartley up to first, and a penalty on the No. 5 Action Express Cadillac moved Derani from fifth to fourth. The two maintained position during the final green lap segment, securing Tequila Patrón ESM's second win of the season; the first for the No. 2 Nissan Onroak DPi of Scott Sharp and Ryan Dalziel.

The Tequila Patrón ESM development program with Nissan NISMO and Onroak will continue into the 2018 IMSA WeatherTech SportsCar Championship. Scott Sharp and Ryan Dalziel will return as co-drivers in the No.2 Nissan Onroak DPi, and Johannes van Overbeek and Pipo Derani will also race alongside each other again in the No. 22 Nissan Onroak DPi. The 2018 IMSA season begins with the first official series-wide test of the year, the Roar Before the 24 at Daytona International Speedway. The first race of the Season, the Rolex 24 at Daytona will be held January 27-28, 2018.

Driver Quotes
Scott Sharp | No. 2 Nissan Onroak DPi
What an amazing race. That was just a stellar performance for both cars at Tequila Patrón ESM. I can't say enough. We had a really strong weekend. To look up at the board so many times to see our cars in first and second, was great. We had a lot of ups and downs on both ends near the end of the race. We had an alternator problem on our car, and so the No. 22 jumped us. They were strong and then at the end, we thought we were going to finish first and second. Unfortunately Pipo got the drive through penalty. They deserved to win, but I'm happy one of our cars still won.

Ryan Dalziel | No. 2 Nissan Onroak DPi
In the four years I've been with Tequila Patrón ESM, we've had so many victories for the No. 2 car that have slipped away, and through nothing that we've done wrong. When we lost the lead in the pits from the alternator issue, I thought the race was over. Sometimes things are meant to work for you, and today was one of those days. For sure the No. 2 car needed it. I'm bummed Tequila Patrón ESM didn't get a 1-2 finish. For sure the team earned it. Overall, this was a great way to end the season for Nissan NISMO, Ed Brown, and the whole team. We're going to enjoy this one until Daytona.

Brendon Hartley | No. 2 Nissan Onroak DPi
I'm so happy with the result. I'm so proud of the team, Ryan, and Scott. We drove a great race, with not a scratch on the car. We were quick, and it was an awesome day. After winning the 24 Hours of Le Mans earlier this year, and then to win Petit Le Mans, this will be a year to remember for me. I want to say thank you to everyone involved. This was awesome.

Johannes van Overbeek | No. 22 Nissan Onroak DPi
It was an amazing team effort by everyone today at Tequila Patrón ESM. Both cars led on and off the entire day. It was a shame to get a penalty with 18 minutes to go, but despite that, I'm thrilled for Scott, Ryan, and Brendon in the No. 2 car. It is a well-deserved victory for them, Tequila Patrón ESM, and the entire team.

Pipo Derani | No. 22 Nissan Onroak DPi
I'm really disappointed with the final result today, but proud of everyone at Tequila Patrón ESM. I'm very happy to continue with an amazing team for the 2018 season.

Bruno Senna | No. 22 Nissan Onroak DPi
I'm very disappointed with the decision of the officials. It's racing, and we're fighting for the win. They decided to start the prototypes behind the GT cars. There are five cars fighting for the win, and contact was made. Our drive through was not deserved. They took our race. I'm disappointed for the crew. We drove a perfect race.