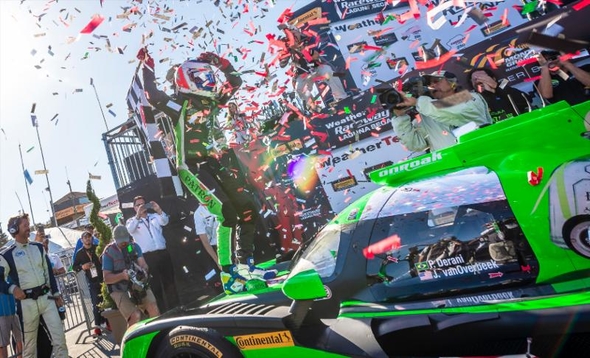 MONTEREY, Calif., – Tequila Patrón ESM returned to victory circle this weekend at WeatherTech Raceway Laguna Seca, starting from the rear of the WeatherTech SportsCar Championship field to win the Continental Monterey Grand Prix by ten seconds. The No. 22 Nissan Onroak DPi of Pipo Derani and Johannes van Overbeek won its second race of 2018, also clinching victory at the Twelve Hours of Sebring earlier this season.

Due to a sudden sickness, Johannes van Overbeek was unable to qualify the No. 22 Nissan on Saturday afternoon, resulting in Pipo Derani qualifying the car in fourth for Sunday’s race. That night, the team made the decision to revert to the usual racing order, putting van Overbeek in to start the race. The move put the No. 22 at the back of the prototype grid for the race start.

The No. 22 took the green flag, and anarchy ensued before the field could pass the starting line. Two prototypes ahead of van Overbeek crashed, spreading debris across the straight of WeatherTech Raceway Laguna Seca. With van Overbeek at the command, the No. 22 narrowly evaded debris, including a flying race tire, miraculously avoiding any cut tires of his own.

The race immediately went to caution, and a short lived green period was met with a crash in the GT field, resulting in another caution. After thirty minutes of circling the track under caution, Johannes van Overbeek pitted from twelfth with less than one green flag of racing complete. Pipo Derani took command of the car, with two hours and ten minutes remaining in the race. Upon drop of the green flag, the team gave Derani the order to race full speed. He obeyed, climbing up to eighth before yet another caution period.

The restart came close to causing trouble for Derani, when brief contact with another car resulted in Derani spinning on track. Able to continue from 11th, Derani pushed on, racing side by side to take position from Robert Alon in turns two and three. With 90 minutes remaining on the race clock, the young Brazilian pitted from sixth for tires and fuel, and within ten minutes had impressively made his way into the top five.

With a solid finish in sight, Derani put heavy pressure on the No. 54 ORECA LMP2 of Colin Braun. His charge continued, passing both Braun and the No. 7 Acura DPi of Ricky Taylor to take fourth place. In no time, Derani took third place from Juan Pablo Montoya before pitting for his final stop of the race. He rejoined in seventh position with 45 minutes left on the race clock. Pit stops cycled through and Derani put in his best laps of the race, sitting in second place with 30 minutes remaining.

Just ahead of Derani, the race leading Mazda of Harry Tincknell was clipped and spun by the No. 52 of Gustavo Yacaman. Derani took advantage, assuming the overall lead by 18 seconds. He ran the car to the checker flag, winning by 10 seconds over Colin Braun.

The No. 2 Nissan Onroak DPi of Scott Sharp and Ryan Dalziel struggled most of the race, starting 10th suffering contact mid race. The pair were able to climb up to seventh place, but ultimately retired early due damage incurred during the race.

One race remains in the IMSA WeatherTech SportsCar Championship. The series will close out the season at Road Atlanta’s Petit Le Mans, October 10-13, and Tequila Patrón ESM will return as the race win defenders, following the No. 2 Nissan Onroak DPi’s victory with Scott Sharp, Ryan Dalziel and Brendon Hartley. The race will mark the final sportscar racing event for team and series sponsor, Tequila Patrón. The race will begin live on FS1 from at 10:30AM ET. For full event information, visit imsa.com.

Driver Quotes
Johannes van Overbeek
Awesome day for Tequila Patrón ESM. Hats off to Pipo Derani for driving the wheels off our No. 22 car. The guys did an awesome job on strategy and pit stops. It is great to win at home, and there’s nothing like a win to make you feel better when you’re sick.

Pipo Derani
It was an amazing day for us. It has been a tough year for us, but every time we have everything together, we can deliver. It’s important for the team. I’m really happy because if it wasn’t for them not giving up, we wouldn’t have finished where we did today. It was just a fantastic day for the team. A big thank you goes to them for giving us the car to win today. We had nice passes after the spin, and I can’t thank the team enough. With only two races left with Tequila Patrón ESM, it means a lot that I was able to bring back a win for them.