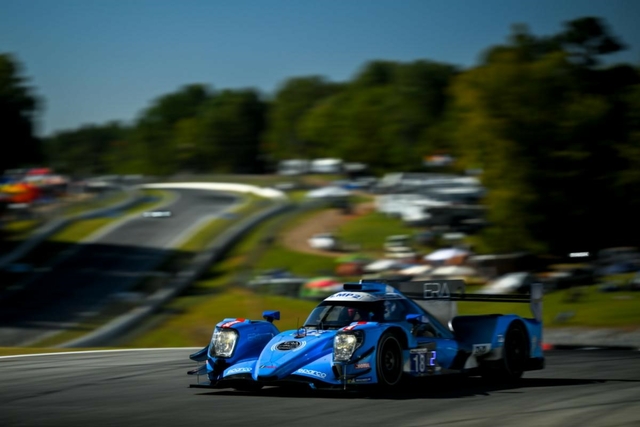 “I’m gutted,” said Team Owner Kyle Tilley. “The guys and girls all deserved so much more. We were on the lead lap and both the car and drivers had fantastic pace. This one will sting for a while, given that it’s not only the race we have lost, but the championship.”

Era Motorsport had a character-building start in the minutes leading up to the green flag. The team opted to make some final performance adjustments and join the grid late, knowing it would result in a drive-through penalty in the opening laps. Dwight Merriman followed the protocol and joined the race, masterfully working his way through the slower GTD and GTD Pro classes in less than 30 minutes, building a good momentum. In the first full-course caution at 30 minutes running, the strategists at Era kept Merriman out as the rest of the field pitted, gaining a lap back for the No. 18 Oreca Prototype. The team pitted Merriman under another caution, conducting a full-service stop with Christian Rasmussen taking over the driving duties, one lap down.

Rasmussen waited out the lengthy caution, coming in to pit just before the race resumed in order to top off with fuel. He took his first green laps from sixth place, on the lead lap. The young driver set the fastest lap of the race on his first green lap, determined to catch the No. 20 of Dennis Anderson, over 40 seconds ahead. He quickly passed Anderson, telling the team the car felt lively. He wasted no time in shrinking the 10-second gap to Ben Keating to just 0.5 seconds in a matter of a few laps. He made the pass with 7.5 hours remaining, focusing on the 14-second gap to Steven Thomas in the No. 11 car. A full course caution closed the gap with just under three hours running. The team pitted under the lengthy caution, putting Merriman back in the No. 18 Oreca.

Able to enjoy some extended time racing under the green flag, Merriman continued to maintain fourth position, keep the car safe from the various classes of traffic around Road Atlanta. He gave the Oreca back to Ryan Dalziel, concluding his racing in the event as the field completed four hours of racing.

Dalziel joined the field with a new rear wing, a full tank of fuel, and a fresh set of tires, and kicked his stint into gear.  He took third place, and a full course caution brought the field together and positioned him to fight for second place. Sadly, misfortune came to the team just past the halfway point. A right front suspension failure brought the team into pit lane, and eventually to the garage in the paddock to undergo repairs.

The No. 18 returned to the race, repaired and ready to go, sadly 18 laps down from the leaders. Rasmussen commanded the Oreca next, immediately setting the fastest race lap for the LMP2 class. Despite the young racer’s strong speeds, the No. 18 Oreca was not able to finish the race. With five hours of racing complete and five remaining. The Era Motorsport machine retired early.

Though the “DNF” is a sad way to end the season, the team still can take pride in a season well done. At the grueling Twelve Hours of Sebring, the team celebrated a third-place finish with Merriman, Dalziel, and Tilley. At WeatherTech Raceway Laguna Seca, Merriman and Dalziel celebrated a second-place finish and climbed a spot yet again at Road America. The duo celebrated their singular victory of the season at Road America, defending the team’s 2021 win at the Wisconsin circuit. The Indianapolis-based team showed incredible speed and consistency at this year’s 25th Annual Petit Le Mans, closing out the year with another strong performance.

Plans for the team’s future racing programs will be announced at a later date. For more information and latest news, visit www.eramotorsport.com.