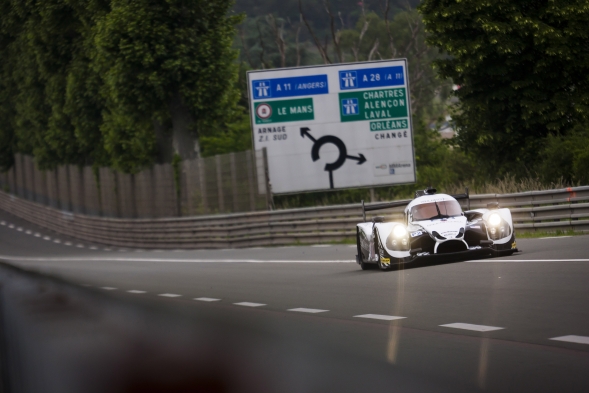 The team participated in the FIA World Endurance Championship Le Mans Test day at the beginning of the month, allowing all competitors to begin preparations for this week’s event.  Due to French laws regarding liquor advertising, Tequila Patrón ESM has welcomed John Paul Mitchell Systems as the primary sponsor for the legendary event, sporting a new black and white livery.

The 24 Hours of Le Mans will push cars, drivers and teams to the limit as they compete for 24 straight hours on the 8.47 mile long course, Circuit de la Sarthe. The 2015 P2 class winners competed over 3,000 miles, battling in various weather conditions to finish on top. Speed, consistency and reliability will be the essential keys to the event, keys the team has held tightly to all season long, never finishing outside the podium yet this year. Tequila Patrón ESM currently sits third in the LMP2 class points as well as LMP2 driver points. As the longest race on the 2016 FIA WEC calendar, the 24 Hours of Le Mans will count as a double points event.

The Le Mans festivities begin today with scrutineering, followed by four more days of preparation and appearances before taking the green flag Saturday afternoon. For all schedule information, vist fiawec.com.

Quotes
Scott Sharp // No. 30 Tequila Patrón ESM Ligier JS P2
Since Le Mans is made up of public roads, it is incredibly difficult to get laps on the track. So to be able to test and have a problem free day and many laps for all drivers is a big comfort bonus heading into race week. Le Mans is a grueling 24 hours. The track is fantastic, with a fabulous flow. Every lap is truly exhilarating. It’s a very challenging track, and you find yourself driving on the knife edge many laps. The weather is ever changing, and due to the length of the track, it can be raining on one end and clear on the other. Le Mans deserves so much more attention in the United States!  It’s the biggest race in the world and so widely followed throughout Europe and Asia. It is a huge privilege to be a part of it.  After having one 24 Hours of Le Mans under our belt as a team, it is much easier the second time around.  All drivers know the track, we know what to expect, we are more prepared for the many challenges facing us, so I feel a huge sense of calm within our garage.

Ed Brown // No. 30 Tequila Patrón ESM Ligier JS P2
The Le Mans Test Day was good, as I was able to get more laps in, especially dry ones! You have to watch for fatigue not so much physically, but mentally. It’s a long week and the track can be very demanding. In addition to that, the ACO rules the silver must drive a minimum of six hours. The best of the best have raced at Le Mans, so it an honor to drive with the best and where the best have raced.

Johannes van Overbeek // No. 30 Tequila Patrón ESM Ligier JS P2
Le Mans is bigger than any one driver or team. Racing here makes you feel very privileged no matter what you’ve done and where you’ve come from. Not only is it a tough race, it’s a tough week leading up to it. The days are very long and by race start, everyone is already exhausted. Dealing with the strain of the week is part of the challenge. It’s a very tough race to finish, let alone podium in. We’re ready for the big show.

Ryan Dalziel // No. 31 Tequila Patrón ESM Ligier JS P2
This year will be my 5th time competing and every year I still feel like it’s the first one. I don’t get nervous or anxious about any other race. It’s just humbling to be there each year and try to once again win it. It’s such a huge race, even just logistically. The Le Mans Test Day just shakes the nerves off about Le Mans. I think we learnt some things about the car and continued to improve. I think nighttime is the most difficult of any endurance race I’ve competed in. It’s not that it is the darkest race, but it can feel almost lonely at times, so you have to be at full concentration. On those freak laps where you don’t pass or get passed, you feel like it’s almost not real. Dealing with the faster and slow cars only multiplies the nighttime difficulty level.

Pipo Derani // No. 31 Tequila Patrón ESM Ligier JS P2
It was great to be back at La Sarthe earlier this month. As track time is very limited and there are many cars on track, I think it was a very good test day for us to get used again to this amazing circuit and feel at home before the race week. Le Mans is one of the biggest single sporting events in the world and one of the three biggest races out there. It’s pretty special to be back here after my debut last year and I can’t wait for the race week to arrive so we can go back to action. It’s an amazing experience and only when you are here and you feel the atmosphere before the green flag you can understand why it is what it is. The biggest challenge in Le Mans is that every second counts. You can’t afford to lose any time because most likely there’s no way back. It’s flat out from light to flag and this makes for an extra challenge for mechanics, engineers, drivers and everyone involved to perform at the highest level without making mistakes. It’s not only about having the fastest car.