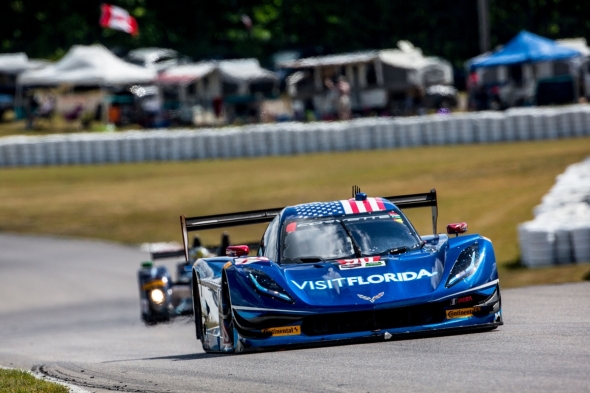 Goossens opened the race from sixth on the grid and wasted no time in moving forward as he slotted the Visit Florida Racing Corvette into fifth in the very first corner. Driving hard around the 2.459-mile fast and sweeping road course, he moved all the way up into the race lead prior to the team’s first pit stop.

When the first round of pit stops began for the top prototype class about 45 minutes into the 2 hour 40 minute race, the team called for Goossens to stay out an extra lap with Team Owner Troy Flis asking for him to push hard on the in-lap. Goossens delivered a remarkable lap which saw the No. 90 Visit Florida Racing Corvette emerge from pit lane third in the order with Dalziel at the wheel.

When Dalziel returned to the fray, he was third in line and when a full course caution was displayed with 1 hour and 15 minutes completed in the race, the team brought the No. 90 machine to pit road and opted to take left side tires only with the call seeing the No. 90 leapfrog back up to the front of the field. 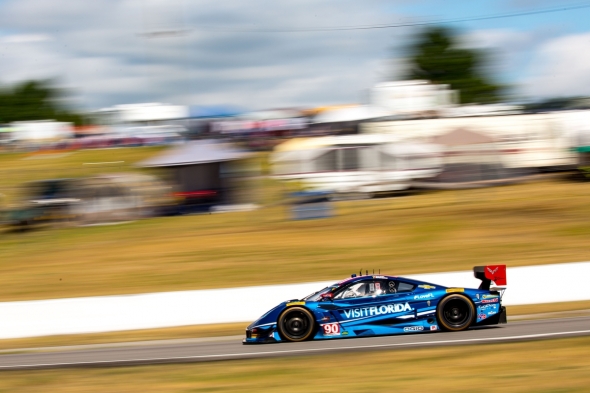 Setting the pace, Dalziel remained at the front of the field as he defended the Daytona Prototype machinery behind. With 37 cars on the tight confines of the 2.459-mile circuit, traffic was a key element to the race. The No. 31 was able to sneak by for the race lead while Dalziel was mired in slower traffic just prior to the Visit Florida Racing team’s final pit stop.

On that final stop, the three front-running Daytona Prototypes took just two tires, while the No. 90 took on all four, with Visit Florida Racing hoping for a late-race yellow that would see the four fresh Continental Tires pay dividends.

Unfortunately, that yellow didn’t come until the final lap of the race, which ended under the caution.

“We didn’t have the qualifying run we wanted but that was more of a trial thing for us,” offered Team Owner Troy Flis. “We had the pace and today we tried to play a strategy call to win the race. I think we could have raced there at the end and not have fallen back taking four tires, but we decided to go with four tires and thought maybe we could get lucky with a yellow and drive around them at the end. The car was really good on a long run, which I’m happy about. Ryan (Dalziel) felt confident in the car, but this many cars on the track, you just lose so much, it’s just really tough. The cars are so equally balanced. It was a good weekend for us, all in all I’m happy with what we came here with. Putting this car together on the road and working out of a truck (after traveling straight here from Watkins Glen last weekend) is hard. I’m very proud of the guys and our program but we’re going for wins the rest of the year. That’s what we’ll keep doing and go on to the next one.” 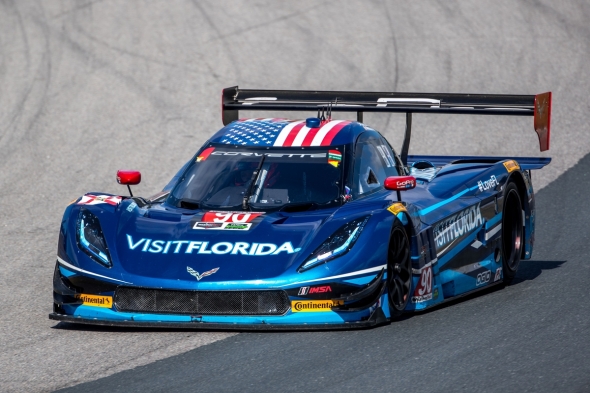 Visit Florida Racing will next travel to Elkhart Lake, Wisconsin as the IMSA WeatherTech SportsCar Championship stages Round 8 at Road America August 5-7.

VISIT FLORIDA RACING DRIVER QUOTES
Marc Goossens: “Once the tires started coming in, my car had a decent balance and it remained consistent and I had zero drop off from the Continental Tires. Once we got into traffic I felt stronger than the prototype guys ahead of us. I was just putting in a string of good laps, and I had a strong in-lap. We gained some track position at that point and tried some stuff on strategy but it just didn’t work out for us. The Visit Florida Racing guys gave us a good consistent car that we can race with so it was good to battle for position. I’m pretty happy with how my stint went, it’s just a shame that we didn’t get the result we were hoping for. A podium would have been nice this weekend.”

Ryan Dalziel: “The positive is that we were consistently one of the fastest cars in our class again. Canadian Tire Motorsport Park is a great track to come to but unfortunately with the high-speed nature of the track it’s extremely difficult to overtake. To be honest, with all of the traffic, nobody is doing anything wrong, but everyone is in their own race. Unfortunately you can lose six seconds on one lap and then be clear on the next lap, but it’s kind of the luck of the draw. So we gambled to try to get track position which paid off at the start. We actually were just as good on two tires as we were on four, so from that point of view everything worked correctly. Without a yellow, we knew it was a gamble, but it is what it is, and we had a good solid race.”