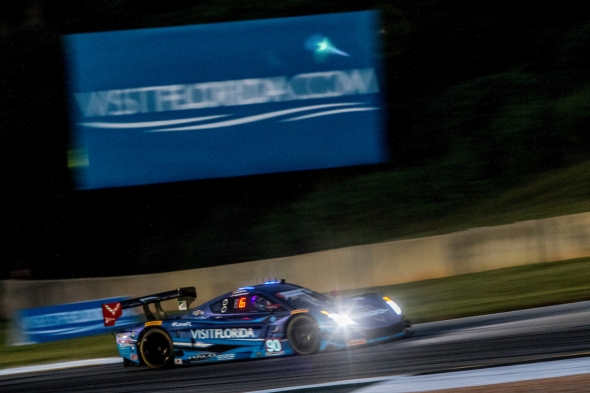 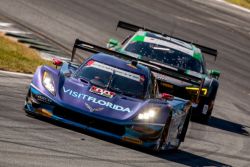 Dalziel started the race from sixth on the grid and had worked his way up into the top-five when the No. 90 VISIT FLORIDA machine started to lose power. The problem gradually got worse and despite making various changes in the pit box, the team was forced to bring the No. 90 VISIT FLORIDA Corvette Daytona Prototype behind the wall to diagnose the problem and make repairs.

“Through the opening stages of the race the car was handling great and everything was going fine,” said Dalziel of his opening stint. “Unfortunately it just started to gradually lose power through the run and then we had to bring it behind the wall. The VISIT FLORIDA team has had some bad luck this season, it’s not what we deserve. A big thanks to all the guys that worked hard to get us back out there. They don’t give up. It’s about getting to the end of the battle.”

Quick work by the ‘Boys in Blue’ in teamwork with the ECR motor squad saw the car back on track with the time spent behind the wall clocking in at 59 minutes.

When Goossens returned to the fray he didn’t have much track time before a long full course caution period was displayed for track repairs when the asphalt started coming up on the track in Turn 3. As the cars circulated under the yellow, track workers put down concrete patches.

When the race finally went back to green just past the five hour mark, the No. 90 Corvette DP showed the same pace as that of the leaders with Goossens setting fast laps each time around. But it wasn’t long before the same power issue began to make itself known and Goossens also made several trips back to the garage as the crew went to work.

“The car was actually handling quite well, the VISIT FLORIDA guys did a great job preparing the car for the Petit event,” said Goossens. “For a while there I had a pretty good pace but unfortunately it just wasn’t meant to be for us today. I can’t thank the VISIT FLORIDA team for all of their hard work today, they never gave up.”

The team worked through several more issues related to the power problem with a few trips back to the VISIT FLORIDA garage area for repairs. Despite the frequent stoppage, the group never gave up and continued to try and find solutions that would see the No. 90 return to the track.

Hunter-Reay strapped in to the car in the final hours but without an additional position to gain, the team opted to stay mindful of their fellow competitors that were in the hunt for the championship and victory and retired the car with just over two hours to go.

“It was great to be with the team all year and starting out with a podium at Daytona,” said Hunter-Reay. “2016 was a pretty painful season for both VISIT FLORIDA racing and myself in the IndyCar program. Today we just couldn’t get rid of this misfire and just one thing after another happened and it was just one of those days and one of those years and we will come out stronger next year.”

Despite the tough end to the year, VISIT FLORIDA Racing Team Owner Troy Flis was proud of his team and is looking forward to turning the page to the 2017 IMSA WeatherTech SportsCar Championship.

"We never found out the underlying issue,” said Flis. “We fixed everything that we could but we still don't know what the problem was and it still kept coming back. We are going to have to get deeper into it if it's an electrical issue or something inside the harness. It definitely was not the year that VISIT FLORIDA had wanted by any means. The guys worked hard all year and it started out okay but we had bad luck in a couple of spots. We just didn't have the speed that we wanted. We had great drivers to take the car home and put it in a good position and make the right decisions. It's too bad that we had a failure that prevented us from finishing the year out strong. It’s been a great run for the Daytona Prototypes, and I hate to see them gone because it was a big part of my life. But I am also excited about the new cars coming up and getting started working on the new stuff. We will start with a clean slate for next year and see what we can do better and try to make the best changes we can make and try to go for the 2017 Championship."

Fans of the VISIT FLORIDA Racing squad can expect announcements regarding the team’s 2017 plans in the near future. 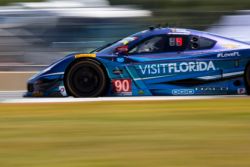