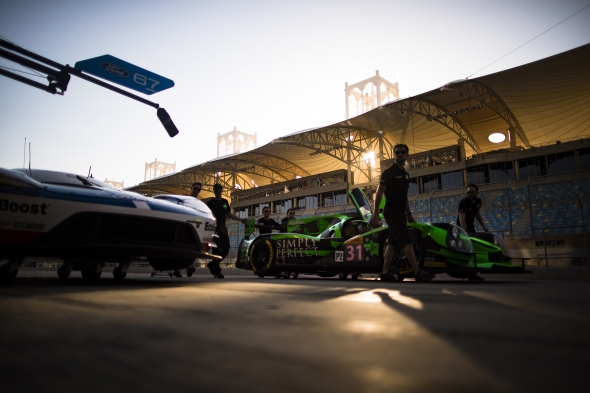 Derani and Cumming qualified with a combined average speed to set a seventh place starting position. A post-qualifying change further up the field moved the No. 31 Ligier up for Derani to start sixth. The young Brazilian showed strength on the start, jumping from sixth to fourth in the opening lap. He continued his climb in the opening stint, racing side by side with the sister No. 30 Extreme Speed Motorsports Ligier of Giedo van der Garde. Derani took the position to run third before making his first pit stop 45 minutes running. He rejoined in fifth, involved in a three way battle for position with the No. 44 Manor and the No. 26 G-Drive machines. Derani took fourth before handing the wheel off to Ryan Dalziel with an hour and a half complete.

Dalziel rejoined in third, and halfway through his stint, took second position over the No. 43 RGR Sport by Morand. He charged forward, creating a nine second gap over the competition, with the No. 35 Signatech Alpine car ahead. Dalziel kept the No. 31 Ligier in second position for the duration of his stint, pitting at the halfway point under a full course caution. Derani resumed piloting duties of the car, rejoining in second as the field went back to green.

Not ten minutes into his stint, Derani engaged in a short lived battle for first position with the No. 36 Signatech Alpine car of Nicolas Lapierre. Derani took the position to lead the P2 class with two and a half minutes remaining. Derani pulled away to create a massive gap over the field, allowing him to make a pit stop with two hours to go and maintain his lead over the field. Before exiting the car for the final time of the 2016 season, Derani held the lead with a fifty second gap.

As announced earlier this year, the Florida-based team will return to the United States for the 2017 season, competing in the IMSA WeatherTech SportsCar Championship Prototype class. Renewing its existing partnerships with Ligier and Oak Racing, the team has also signed a multi-year partnership with Nissan NISMO to enter two new Daytona Prototype international (DPi) cars. The season begins January 26-29 at Daytona International Speedway where the team will defend their historic win at the 24 Hours of Daytona.

Ryan Dalziel
It’s been a long and tough WEC season but I couldn’t be any more proud of our final race. We started the season strong and we ended it strong. It was unfortunate that the FIA allowed so many new 2016 driver ratings slip through their fingers so we found ourselves honoring the spirit of the sport but ultimately being cheated out of the results we deserved. It was for sure a bitter sweet weekend. Bitter to be leaving the WEC championships but super sweet that Daytona is not too far away. Thank you to each and every member of Patrón ESM and Onroak and a huge thank you to Tequila Patrón for their amazing support of our race program.

Pipo Derani
It was a great season. We showed some great pace during many races. We did the best we could to finish fourth. It was the best finish we could have achieved in the championship and in the race. The team did a fantastic job the whole year. We were one of the best teams on pit stops and strategy. They did great, and the race was amazing. Ryan and I managed to get the car in the lead by 50 seconds to give it to Chris for the final hour. Chris did an amazing job. It’s tough for us to compete against three pro lineups. They have three pro drivers in the car while we have a bronze. Everyone should be proud of what we achieved today. We proved we could be in front if we were fighting with everyone equally with driver rankings, which wasn’t the case. If it was, we would have had a better result today. We achieved the best we could have done.

Chris Cumming
It was a difficult way to end the race, but in the end the result was decent.  Trying to hold on to positions with old tires is never fun, but we wouldn’t even have been in that position without the great work of Pipo, Ryan and the rest of the team during the first four and a half hours of the race.  I did my best with what I had, but unfortunately it wasn’t enough to hold on to the podium.  I want to thank everyone at Tequila Patrón ESM for their outstanding level of professionalism, camaraderie and team spirit during the year.  It was a very competitive year and we kept fighting right until the end.  It was an effort everyone can be proud of that has left me with many fond memories.