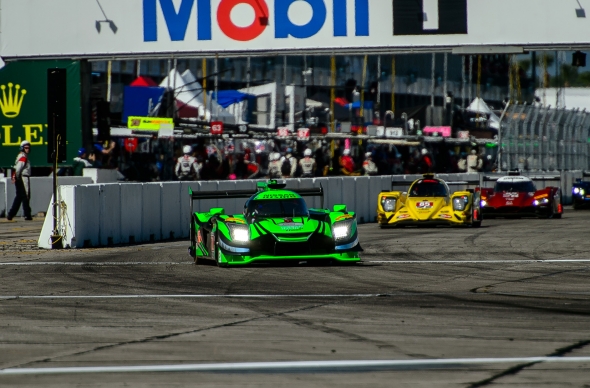 SEBRING, Fla., (March 18, 2016) – After a challenging race weekend, defending race winning team Tequila Patrón ESM has retired early from the Mobil 1 Twelve Hours of Sebring Presented by Fresh from Florida. Both the No. 2 and No. 22 Nissan Onroak DPi cars struggled throughout the race with mechanical issues, retiring just before the halfway point.

As is the normal with new race programs, the team dealt with issues throughout the practice and qualifying sessions leading up to race day, Round 2 of the IMSA WeatherTech SportsCar Championship. Brendon Hartley qualified the No. 22 Nissan Onroak DPi in fifth position, while Pipo Derani and the No. 2 car suffered boost issues, resulting in the team unable to run and set a qualifying time.  With both cars set up to run well at night in the cooler temperatures, the team felt confident both Nissan DPi cars would perform strong, should the demands of Sebring International Raceway not prove to be fatal.

The No. 2 started from the rear of the Prototype Challenge (PC) class, and made quick work getting through the slower PC cars as the field ran the opening green laps. In the opening 15 minutes, Derani pitted for the team to investigate a potential boost issue, which continued to plague the No. 2 car for the remainder of the morning and afternoon. While Hartley ran in sixth trouble free, the No. 2 went back to the garage for over 100 laps, with the crew working quickly to get the car back on track. By the time the car rejoined the field, the team made the decision to troubleshoot any additional issues by using the race as a test session.

Hartley, Ed Brown, Johannes van Overbeek, and Bruno Senna each took their opening stints in the No. 22, climbing as high as fourth before mechanical gremlins struck their car as well.  At the five and a half hour mark, the pit called Senna in to investigate a damaged exhaust that ultimately ended the race early for the team. Shortly after, the race was also called for the No. 2 car, preventing the team from running to the halfway point.

Despite the disappointing end coming before the checker flag, optimism remains at Tequila Patrón ESM. By continuing to run although many laps back, the engineers and drivers learned valuable information about the two machines that will be put towards the remaining races of the 2017 IMSA WeatherTech SportsCar Championship.

The series next competes in Long Beach, California, for the Bubba Burger Sports Car Grand Prix at Long Beach Grand in conjunction with the Verizon IndyCar Series and Pirelli World Challenge. The event will feature two days of racing on April 7-8, hosting the first sprint race of the season. For more information, visit imsa. com.

Driver Quotes
Scott Sharp | No. 2 Nissan Onroak DPi
It is disappointing all the way around. We turned the final laps into a test session to sort out some of our issues, and the 22 car had a great run going. It was sad to see a broken exhaust ended their day.

Ryan Dalziel | No. 2 Nissan Onroak DPi
It is a disappointing day. Some gremlins have been on the car all weekend, and we may have figured them out when we went back out during the race. It has been one of those weird weekends. We kept fixing stuff, and it kept breaking. There was some kind of electrical gremlin that hopefully we found. We wanted to use what race time we had to practice and iron out the creases before Long Beach. It is disappointing as a group because we had a good pace here. It seems like we spent most of the weekend making the cars good for the second half of the race, and we did not get there. It is what it is. That is racing, and Sebring is tough. We’ll figure out what went wrong, and we’ll be there in long beach.

Pipo Derani| No. 2 Nissan Onroak DPi
We wanted to get through to the end of the race, and we did not. After finishing at Daytona, we had high expectations for Sebring. At the end of the day, we knew it was going to be difficult in normal conditions. The track is hard on the cars, land tough on the drivers physically. Sebring has beaten us this time. Our program was not where it should be to tackle Sebring. It is a demanding and tough race. We look forward to continuing the development of our program. It is new, and the Twelve Hour was our second race. It could no’t be more difficult than that. We’ll work to reduce our problems and have better races moving forward.

Ed Brown | No. 22 Nissan Onroak DPi
It was a frustrating week again for Tequila Patrón ESM. It is the reliability problems stemming from the fact that we got the cars late. We do not have enough laps to figure this stuff out. The 22 car was running pretty good, but the exhaust failure ruined the day. We’ll move on, keep learning, and hopefully get these things running.

Johannes van Overbeek | No. 22 Nissan Onroak DPi
It was a challenging day and weekend for Tequila Patrón ESM. Both cars still have some teething issues and did not the amount of testing that we needed or wanted. But the ESM crew is working through all the issues, and Nissan has been a great partner on their end. Now we need to regroup and get prepared for Long Beach.

Brendon Hartley | No. 22 Nissan Onroak DPi
It was an abrupt end to our Twelve Hour, and an unfortunate end to our race. I thoroughly enjoyed the experience. The team was awesome all weekend and we made good progress. We were pretty optimistic for the night racing and the cooler conditions. We definitely suffered at the beginning of the race in the hot conditions compared to our competitors, but we knew we set up the car well for the end of the race. It is a shame we did not make it there to the end to challenge for a podium spot, but I’m sure the team will bounce back in the coming races.

Bruno Senna | No. 22 Nissan Onroak DPi
It is a shame we got our race cut short. We were able to get into a groove and learn more about the car. With every mile we do, we learn more. Hopefully we can get to the next race with more problems sorted and a better set up for the car. We learned a lot. I’m looking forward to the next race in Watkins Glen. It’s a new track for me, so I need to do a few more laps to get on top of it. We’ll have a good and reliable car there