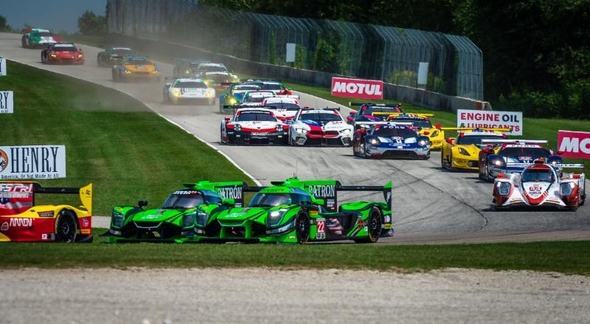 ELKHART LAKE, Wis. – After a string of bad luck over the course of several races, Tequila Patrón ESM has rebounded to return to the top six in the IMSA WeatherTech SportsCar Championship. After suffering a fuel related fire to the No. 22 Nissan Onroak DPi in practice one, the team rebuilt the machine and rebounded to finish fifth after starting in 12th.

Following a series of unfortunate gremlins at the Sahlen’s Six Hours of the Glen and the Mobil 1 SportsCar Grand Prix, the defending champions of the Continental Tire Road Race Showcase looked strong heading into Sunday’s race, placing in the top five positions in three of the five pre-race sessions. With a newly adjusted Balance of Performance (BoP), the level of competition amongst the prototype field reached new heights at Road America, giving every prototype competitor a chance to fight for the overall win.

A fire on the No. 22 Nissan Onroak DPi resulted in drivers Johannes van Overbeek and Pipo Derani missing the first two practice sessions on Friday, but the pair rebounded to set the fastest lap for Sunday’s pre-race warm up.

The No. 2 and the No. 22 Nissan Onroak DPis started in 12th and 13th, with Scott Sharp and Johannes van Overbeek running the opening stints. The first caution of the race came in the opening lap when the No. 52 prototype drove across the track, in front of Johannes van Overbeek. The Tequila Patrón ESM driver narrowly and expertly avoided the contact, and continued to fight with Penske’s Juan Pablo Montoya for eighth position. He made the pass and maintained position until the competition of his stint. He pitted in ninth, followed by Sharp in 11th, and Pipo Derani and Ryan Dalziel took over under caution to finish the race.

Dalziel and the No. 2 restarted in tenth, and Derani in 11th, and the duo quickly worked their way up to seventh and eighth positions at the conclusion of the first hour of racing. After a side to side battle with Helio Castroneves in the Penske prototype, Derani climbed to sixth position by the halfway point. Taking a gamble on the fuel strategy, the team kept Derani on track for as long as possible, and with 41 minutes remaining, he made an expert pass on the No. 77, and climbed up to third position with Dalziel pushing in fifth place. Derani continued to charge forward, passing the No. 5 of Filipe Albuquerque to sit in second with less than 30 minutes remaining. Dalziel pitted from the top five for his final splash of fuel, rejoining in ninth position. Derani rejoined in ninth, but through his own effort and the fuel strategy of other teams, he continued to climb in the final minutes. At the checker flag, Derani set the fourth fastest lap of the race, finishing in sixth place position. Ryan Dalziel and the No. 2 Nissan Onroak DPi, on an alternate fuel strategy, finished in ninth position.

Tequila Patrón ESM next competes at Mazda Raceway Laguna Seca, September 7-9, and will close out the season with Petit Le Mans October 10-13. For full schedule and ticket information, visit imsa.com.

Driver Quotes
Scott Sharp
While Road America threw Tequila Patrón ESM many hurdles, everyone in the team did a fantastic job to rebound and put both cars in contention at various times during the race. Pipo had a strong race lap that showed once again the potential of our Onroak Nissans. Unfortunately the way the yellows fell didn’t optimally work for our strategy. Pipo was running second with an hour to go but we ended up sixth and ninth. Hats off to everyone on the team!

Ryan Dalziel
Road America was truly a difficult race for us, but it was also a testament to what a great group of people we have on this team. We’ve had a bit of bad luck over the past few races, but these guys at Tequila Patrón ESM have really put the hours in to not only get us back on track, but to bring us to the front and race competitively. While our car was looking strong in the practices, struggled to be competitive in the race. The yellows didn't play into our hands, and we finished ninth. Although it’s disappointing, I’m very happy we’ve shaken those technical gremlins off our backs, and I’m looking forward to finishing the final two races on top.

Johannes van Overbeek
Even though the results didn’t show it, the weekend was positive for Tequila Patrón/ESM. For starters the team did an amazing job recovering from Friday’s fire. Despite struggling with setup we had two cars that were competitive in the race. And both cars finished the race without issue which has been a struggle as of late. I’m looking forward to good things a Laguna Seca.

Pipo Derani
It was such a difficult weekend for us. We had a fire in practice one and missed all of Friday. After a great job by our crew to repair everything, we managed to get some laps in on Saturday. We started at the back of the grid, and finished sixth, which was a good finish for us after starting second from last. I owe a big thank you to my crew for getting my car repaired and able to race. So we move on. It’s good for the team to be able to finish both cars, and hopefully we can improve from there for the next two races.