THE PLOT:
On-form Ryan Dalziel produced a battling display against the odds to go top of the Grand-Am Rolex Sports Cars Series standings after a hard-fought fourth place in the Porsche 250 at Barber in Alabama.

No Short Cuts as Ryan Dalziel Heads for Barber

THE PLOT:
On-form Ryan Dalziel aims to keep his 2012 hot streak going with another devastating display with Starworks Motorsport.

Ryan, from Windermere in Florida, heads into the Grand-Am Rolex Sports Car Series Porsche 250 at Barber in Alabama on the back of a sensational class win in the first ever FIA World Endurance Championship round at Sebring, a stunning second in the Rolex 24 at Daytona and a podium in the Gulf 12 Hours at Abu Dhabi.

Ryan Dalziel is on Top of the World 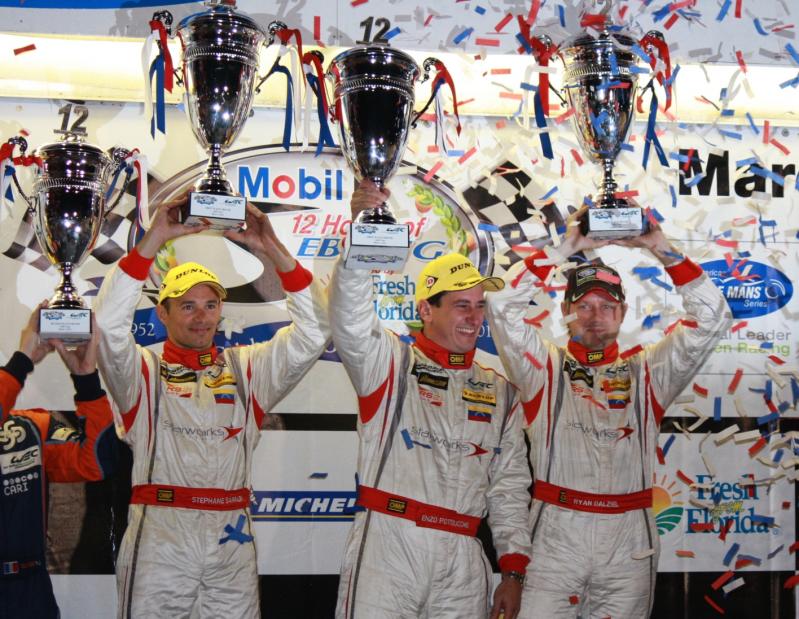 THE PLOT:
Ryan Dalziel produced one of the gutsiest drives of his career to beat the odds - and the opposition – and get his FIA World Endurance Championship campaign off to a flying start with a stunning third place overall and an LMP2 class win in the 60th Mobil 1 Twelve Hours of Sebring fuelled by Fresh From Florida.

Ryan Dalziel Ready to take on the World

THE PLOT: In-form Ryan Dalziel is hoping to turn a brilliant start to the 2012 season into a dream world at Sebring this weekend.

The 29-year-old from Windermere in Florida will make his debut in the FIA World Endurance Championship with Fort Lauderdale-based Starworks Motorsport in the Honda Performance Development LMP2 car alongside Venezuelan ace Enzo Potolicchio and French star Stephane Sarrazin.

Ryan's Ready For The Biggest Year Of His Career

Ryan Dalziel is one of the hottest properties in the Grand-Am Rolex Sports Car Series at the present time. A proven winner, Orlando-based Ryan also aims to shine on the world stage after Starworks Motorsport announced they had teamed up with Honda Performance Development to take on the new FIA World Endurance Championship.

Ryan, 29 — who also has a home in Hamilton, Scotland — already believes 2012 will be the biggest in his career. But it has not all been plain sailing. Ryan has had his fair share of downs as well as massive highs like winning the 2010 Rolex 24 title.

THE PLOT: Ryan Dalziel produced one of the best drives of his career in the Grand-Am Rolex 24 at Daytona, but it still wasn’t enough to win him his second Rolex watch.

Orlando-based Ryan, originally from Lanarkshire in Scotland, had put the Starworks Motorsport car on pole position on Thursday.

Ryan's Keeping Watch Out For A Rolex

THE PLOT:
2010 Rolex Daytona 24 winner Ryan Dalziel is hoping to keep perfect time this weekend and get his hands on a second Rolex winner’s watch.

THE PLOT:
Ryan Dalziel turned up the heat in Abu Dhabi to help United Autosports grabbing a stunning third place in the inaugural Gulf 12 Hours at the Yas Marina.

The Orlando-based  star, who is a front-runner in the Grand-Am Rolex Sports Car series, produced a dynamic drive to power the Audi R8 LMS to third place in qualifying, then kept the Leeds-based team in the hunt for glory with a powerful display behind the wheel.

Ryan Aims For High In Dubai

THE PLOT:
Ryan Dalziel is planning to turn up the heat on his Grand-Am rivals with a fast and furious workout in Dubai.

The Orlando-based prototype driver will swap his Starworks Motorsport Ford for a United Autosports Audi R8 LMS for the 24-hour showdown in the United Arab Emirates this weekend (January 12-14) and then the Gulf 12 hours of Abu Dhabi (January 20).

Dalziel Teams Up With United Autosports For Winter GT Races

THE PLOT:
Grand-AmRolex race-winning driver Ryan Dalziel has set his sights on a dream season with Starworks Motorsports.

Orlando-based Ryan finished the season in stunning fashion with a dramatic win in Mid-Ohio and has now revealed he will line up with the Fort Lauderdale team in the #8 StarworksFord Daytona Prototype for the 2012 campaign.

CORE values to the fore as Ryan suffers

THE PLOT: Ryan Dalziel was left gutted, bruised and battered after a late collision cost CORE Autosport a Petit Le Mans finish at Road Atlanta.
The team – with Jon Bennett and Frankie Montecalvo – had shown they had the pace in the LMPC class.
But just nine laps from the end of the 10-hour race, Orlando-based Ryan was looking to consolidate fourth place in class when he was shunted from behind by the Dyson Racing LMP1 car. The 150mph collision sent Ryan into the wall.
It had been the second big smash of the day for the CORE Autosport crew. They had been third in class at the halfway point when Jon Bennett was hit by a GT car which had spun and was trying to rejoin the track. That meant lengthy repairs behind the wall and put the team on the back foot.
But Lanarkshire-born Ryan was delighted with the pace of the car, and being able to help Core Autosport clinch first and second in the driver standings and, first in the team championship in the American Le Mans Series.

Ryan aims to be man of Atlanta

Now the Orlando-based star wants to be a night rider by leading CORE to an LMPC win in the 10-hour classic Petit Le Mans showdown.

Tears and cheers as Ryan wins at Mid-Ohio

THE PLOT: Ryan Dalziel produced one of the best drives of his career to steer the Starworks Ford-Riley to a sensational victory at Mid-Ohio.

The Orlando-based ace defied a charge from newly-crowned Grand-Am Rolex Sports Car champ Scott Pruett to take the chequered flag in the EMCO Gears Classic and spark tear-filled celebrations in the pitlane.

Ryan's ready to rumble at Mid-Ohio

THE PLOT: Ryan Dalziel is ready to rumble after a frustrating Grand-Am season. The Florida-based star has performed heroics in the Starworks Motorsport team, with three podiums and three fourth-place finishes.

But the Fort Lauderdale team’s attempts to get on the top step of the podium have been hampered by a series of collisions.

Double vision's a sore one for Ryan Dalziel

THE PLOT: Ryan Dalziel suffered double vision at the Circuit Gilles Villeneuve — and admits it gave him a real headache.

The super-quick Scot qualified and started the Grand-Am Rolex Sports Car Series race in the #2 INA Venezuela/Duncan Porsche-Riley before handing over to Venezuelan Alex Popow.

THE PLOT:
Ryan Dalziel has warned his rivals to keep an eye on their mirrors in Montreal because he is fed up of coming third.

The Orlando-based driver’s third place last time out at Watkins Glen was his third of the season. He reckons it is time for the Fort Lauderdale-based Starworks Motorsport team to taste the sweet champagne of victory.

THE PLOT:
Ryan Dalziel stormed back on to the podium in the Grand-Am Rolex Sports car Series at Watkins Glen.

The Orlando-based Scot barely put a wheel wrong as he held off AIM Autosport’s Mark Wilson in the Canadian Tire 200 at the Glen in New York.

WATKINS GLEN, August 12-13.
THE PLOT: Ryan Dalziel could be forgiven for being sick of the sight of Chip Ganassi Racing duo Memo Rojas and Scott Pruett.

Orlando, Florida  – Scotland’s Ryan Dalziel made a welcome return to the Grand-Am Rolex Sports Car Series podium at the weekend, taking a third place finish together with team-mate Mike Forest for Starworks Motorsport in Round 3, the ‘Porsche 250’, at Barber Motorsports Park in Birmingham, Alabama.